The supermodel celebrates her bachelorette party in tropical paradise

Bar Refaeli decided to forgo the typical bachelorette party destinations and hang out with her five best gal pals at Club Med Finolhu Villas in the Maldives, a rep tells PEOPLE.

The 30-year-old, who is engaged to Adi Ezra, 40, posted a photo of herself on Instagram in a teeny-weeny black bikini complete with wedding veil, pink sunglasses and a sash with “Bride to Be” written on it. The Israeli supermodel also posed for a photo in the water, donning a pink crown.

Refaeli documented her pre-wedding celebration on Instagram, sharing photos of the Indian Ocean, a pic of herself unwinding with a cocktail and a shot of fun in the sun with her friends.

Refaeli will reportedly tie the knot on Sept. 24 at Beresheet Hotel, Carmel Forest, in Israel.

In March, PEOPLE confirmed that the blonde bombshell was officially off the market.

“We’re pleased to announce the supermodel Bar Refaeli is engaged to boyfriend Adi Ezra,” her rep confirmed to PEOPLE. 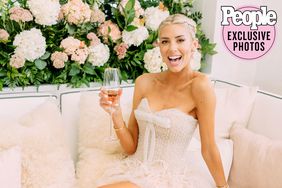