She wears tie-dye, is all for pot, hangs with celebs and she's got more than 1 million followers on Instagram. For this octogenarian, age is truly nothing but a number

Meet Baddie Winkle. Though she was born Helen Van Winkle in 1928, on the Internet, she's "Baddie Winkle." Her transformation began as a way to cope with the death of her son and her husband. "I cried all the time because I couldn’t come to terms with it, so I made myself over into Baddie Winkle," she told Refinery29. Since starting her Instagram account (with the help of her 19-year-old great-granddaughter), she's amassed more than 1 million followers – and quite a few celebrity friends.

Most recently, she was invited by the one and only Miley Cyrus to join her at the VMAs. Cyrus has been a Winkle fan for a while now – the 87-year-old has made multiple appearances on Miley's Instagram, and the singer even called Baddie her "role model".

Unlike Cyrus, who is outspoken about her love for marijuana (she did pass around a lit joint following the VMAs, after all), Winkle admitted to Cosmopolitan that she doesn't smoke weed – although judging by her Instagram, she's a big supporter of it.

Since her Internet fame has really started to soar, Winkle's been invited to mix with some pretty influential people. Two months ago, she rubbed elbows with "babe" Gwen Stefani.

Winkle has captured the attention of the fashion industry, too. She starred in a campaign for celeb-favorite brand DIMEPIECE LA, "to prove, once again, that you’re never too old to be the baddest bish in the room." Amen.

Baddie lives with her granddaughter, Dawn, and great-granddaughter, Kennedy. The latter gets the credit for Winkle's distinct style. "Kennedy is responsible for all of this," she told Refinery29. "Kennedy and I have a lot of fun together. We're very close."

With Internet fame comes Hollywood fame, too – at least for Winkle. She was invited to the season 3 premiere of Orange Is the New Black, where she hobnobbed with Piper and the rest of the Litchfield crew.

But perhaps Winkle's biggest fan base is young people who view her as an inspiration. She told Cosmopolitan that she's been invited to several frat parties, and if this 'gram is any indication, she has a pretty good time.

With all the bright color in her wardrobe, Winkle could be mistaken for a rave-goer, right? DJ Dada Life must have thought so, as he invited her to join him at Electric Daisy Carnival, better known as EDC, to get down on stage.

Rounding out Winkle's star-studded squad is none other than Nicole Richie, with whom she learns about crystals and goes for motorcycle rides. #Goals 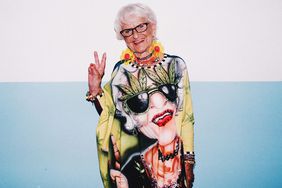 Hey Drake: We Know an 87-Year-Old Fan Who'd Like to Meet You 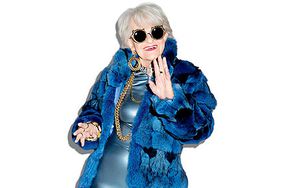