The Internet Can't Get Enough of This Baby's Enviable (and Gravity-Defying) Hair!

Coral is a vision of hirsute perfection at just two months

Do you ever feel good about your hair? Well, a 2-month-old is about to wreck that.

Meet Coral. Coral lives in Hawaii, she has eyes the color of an icy crevasse and a mane of shockingly perfect hair that presumably induces jealousy bordering on rage in all whom bear witness to it.

To this date, that’s almost 2 million people, after a pic of her was posted on Imgur last week. Such is the power of the internet. You can keep up with Coral and her parents, Mike and Drea Rader, on YouTube, where videos confirm that yes, this kid’s hair is real.

Imgur users can’t get enough of the raven-haired baby girl, with several commenters weighing in on her gravity-defying mane.

“Your daughter could star in a Zoolander prequel,” one user commented.

“At this speed you can expect the first white hair around 4 months,” another user posted.

“It’s all the time,” Mike tells PEOPLE of his daughter, who was born on Feb. 27. “People crowd around and look at her and ask about her hair.”

Despite the attention she’s always received, the proud dad says he’s “in disbelief” that the rest of the world is paying attention too.

“It’s crazy that so many people have an interest!” says Mike, who is the founder of Brandroot.com.

Mike says that Coral was born with a full head of hair and that he’s being “combing her hair since day on.”

“I was hoping she’d have black hair like my wife and blue eyes like me,” Mike says, also revealing that they wash her hair with Honest shampoo and that Drea “puts headbands on her all the time.” 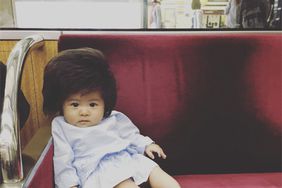