Ashton Kutcher just put all of our Mother’s Day gifts to shame.

Instead of just picking up a card and some flowers, Kutcher, 37, decided to fulfill his dream of remodeling his mom’s home in Homestead, Iowa.

“It’s my way of saying thank you to my mom,” Mila Kunis‘ fiancé explains in a clip from a documentary accompanying the home improvement. “My mom has been the greatest influence in my life – my parents gave me everything. They went to great sacrifices to give me the life that I have and anything I can do to say thank you is the right thing.”

Kutcher orchestrates the remodel from Los Angeles, thanks to technology from Houzz, an online design site he’s invested in.

“My stepdad and I built this place when I was 13-years-old,” Kutcher says of the house. “But these days, we’ve all moved out and we’ve kind of outgrown the space.” After just having a daughter, Wyatt Isabelle, Kutcher wants to expand the house for his growing family.

Kutcher enlists the help of his stepdad, Mark, to plan the surprise. “The one thing that has eternally bonded my stepdad and I is that my stepdad loves my mom as much as I do,” he says. “When you’re the oldest son, and your parents have gone through a divorce, you’re always mistrustful of any other guy. But Mark stepped in and a lot of ways was there for me in ways my dad couldn’t be there for me. I’m one of those people in this world who’s lucky enough to have two dads. I’m just a blessed person to have that much love in my life.”

After renovating the basement for 27 days, Kutcher revealed the remodel to his ecstatic mom.

“Oh, this is beautiful,” she exclaims, wiping tears from her face.

“I went to visit Ashton and the new baby and they decided they needed me to stay out there for a little while to help,” his mom explains. “And I come, and this is what I find. It does mean a lot to me, it’s beautiful.”

“Being able to do this for my mom it’s like a lifelong dream,” the former Two and a Half Men star says. “You know, you grow up and you have a good parent, and I don’t know that there’s anything I could ever do that really says thank you, but trying sure feels good.” 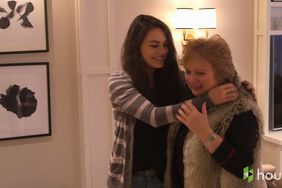 Mila Kunis Surprises Her Parents with Home Makeover: 'I Desperately Want to Give Them Something That I Think They Deserve' 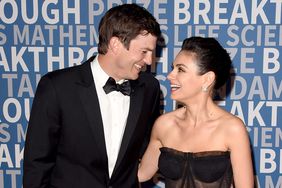 Mila Kunis Says She and Ashton Kutcher Are 'Goofy Parents,' but Jokes They 'Don't Have Skill'