"We wanted an intimate, farm-inspired wedding," bride Ashley Williams tells PEOPLE of her May 29 nuptials to producer Neal Dodson, held at the Nashville home of her sister Kimberly Williams-Paisley and country star Brad Paisley. "We basically planned an upscale keg party!"

The Something Borrowed actress – clad in ivory Augusta Jones – and Dodson, who have been a couple since meeting eight years ago in acting class, exchanged vows they wrote themselves in front of an intimate gathering of about 50 guests.

The reception – held in the sand pit where Paisley trains his horses – was equally low-key, with music provided by a local country band and guests sipping whiskey-based cocktails. "He allows me to laugh at myself and calms me down," gushed Williams of Dodson, whom she calls her "best friend." "He puts things in perspective." 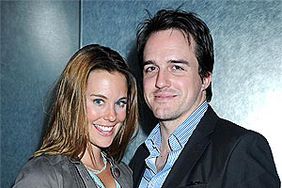