While the singer hit the stage and performed her hits – including “Same Old Love,” “Come & Get It” and “Love You Like a Love Song” – in front of a sold-out crowd, the High School Musical co-stars danced and sang along in the Call It Spring takeover of Hyde Staples Center.

Tisdale arrived first with her husband Christopher French, and Hudgens snapped a cute photo for the couple after she arrived with her sister, Stella.

The foursome also bopped along in their seats when DNCE – fronted by Joe Jonas – sang their hit song “Cake by the Ocean” while opening for Gomez.

Gomez takes her Revival tour abroad Monday night in Canada before heading out on the Asian leg later this month. 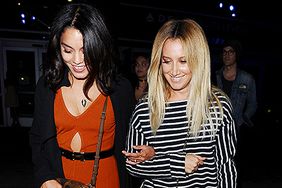