Simpson tells PEOPLE she's the messy one, while Jessica is "an amazing cook"

Ashlee Simpson, who’s been linked with Fall Out Boy’s Pete Wentz since splitting with her guitarist, Braxton Olita, over the summer, tells PEOPLE she’s happily unattached.

“I am single and loving it and enjoying every moment to myself,” Simpson, 22, said at Tuesday’s American Music Awards in L.A. “It’s fun. I’m enjoying life.”

Decked out in a Monique Lhuillier dress and Jimmy Choos, Simpson recently returned from London, where she had been starring as Roxie Hart in the musical Chicago.

“I’m happy to be home,” she told PEOPLE. “Trying to take a few weeks off and just be normal. Got a new house that I’m looking forward to. I’m living with my sister right now. It’s great. I’m definitely messier. But she’s been a great big sister. She’s definitely taken me under her wing and let me live in her house and invade it.”

So what do she and Jessica, 26, do together at home? “She’s been cooking for me. She’s an amazing cook. I try to help out, but usually I do the green beans and the cake and that’s about it.”

Wentz, 27, the Fall Out Boy bassist who was been spotted out with Simpson this fall, also said he’s not in a serious relationship. “I’m just having a good time right now. Just going on dates,” he told PEOPLE at the AMAs. “I want to be with my wife forever, so I think I’d want to get married at like 30 or 35.”

Good thing they’re on the same page. Both Wentz and Simpson attended the Nov. 16 Nintendo Wii launch party at Hollywood’s Boulevard club, where Simpson settled into the lap of Charmed actor Drew Fuller for a major makeout session – and Wentz glumly walked out of the party. 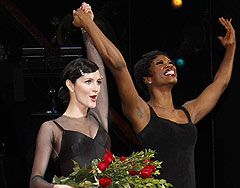 Ashlee: Marriage 'Not On My Mind'

Jessica Simpson on Ashlee as a Mom: 'She'll Be Amazing' 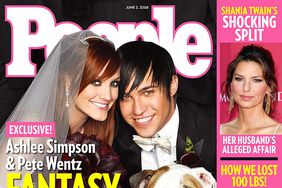