First Warren Beatty, then Cybill Shepherd, now Arnold Schwarzenegger. While the first two, who are liberal Democrats, have been mentioned as possible future occupants of the White House, Arnie (a Republican) is considering a run for governor in California. He tells the November issue of Talk magazine that he has thought “many times” about seeking office. “The possibility is there because I feel it inside,” the Kennedy in-law said. (His wife is Maria Shriver, whose mother Eunice Kennedy Shriver.) “I feel there are a lot of people in politics that are standing still and not doing enough. And there’s a vacuum — therefore, I can move in.” A future run on the Presidency is out, though. The Austrian-born “Terminator” star is a U.S. citizen, but, under the Constitution, only natural-born citizens are eligible to be President. 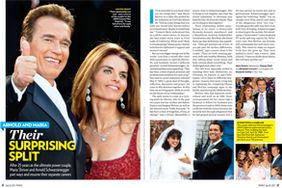 Arnold and Maria: Their Surprising Split