The Scream actress and Foster the People artist have tied the knot in Fort Worth, Texas

The Scream actress and the Foster the People’s artist tied the knot on Saturday in Young’s hometown of Fort Worth, Texas. Surrounded by 350 guests, the two lovebirds said their vows at Saint Andrew’s Episcopal Church, where Young frequented as a child.

“This has been by far the best weekend of our lives,” the couple tells PEOPLE. “Getting to have all of the people we love so incredibly much in one place was truly unforgettable and special. It’s not every day you get to marry your best friend and soul mate. We’re excited to begin our lives together, forever loving and lifting each other up.”

The menu was created with all of Carlson and Isom’s favorites in mind. Passed items included fried oysters, shrimp remoulade, lobster puffs and mini avocado toasts. There was also a risotto station with a variety of toppings, mini grilled cheddar on sourdough with tomato soup shots, gourmet pizzas, and tenderloin and truffle fries.

The cake featured a beautiful floral halo with cascading petals hung over the wedding cake which was covered in ombré sugar flowers. In addition to the wedding and groom’s cakes, Carlson requested Dippin Dots, which were served in 5 flavors.

The duo, who got engaged in January 2016 in Iceland, had been dating for two and a half years before Innis proposed.

“I’ve been madly in love with this one ever since we stayed up till 5am professing our undying love for Ian Curtis and laughing so hard we couldn’t breathe at Lake Placid (the movie),” Young shared on Instagram. “It’s been two and a half years since that night, and I still can’t even believe you’re real– I could not be more profoundly happy to go on adventures with you forever.”

While she filmed Scream in New Orleans and he toured the globe with Foster the People, the duo spent most of their three-year relationship apart, “but I wasn’t really working and he wasn’t on tour for the first six months we were dating,” Young previously told PEOPLE. “That created a great foundation. And we make sure we never spend more than two weeks away from each other.”

The couple had originally been planning a destination wedding to somewhere like Big Sur, California, “but my family has 100 people in it so we’re looking at a 400-person celebration. We quickly realized it had to be near Fort Worth, Texas, where I grew up,” Young said. “There’s just not enough places for people to stay if we have it somewhere like Big Sur.”

Young recently wrapped production on a short film, The Blazing World, which she wrote and directed. 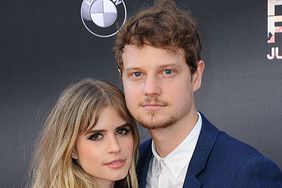