Are George Clooney and Brad Pitt Having a 'Bromance'?

Meredith Vieira confronts the Leatherheads star on his personal relationship

George Clooney has just been too public with his current personal relationship – so much so, that Meredith Vieira confronted a slightly unnerved Clooney about it after he discussed his new movie Leatherheads on Thursday’s Today show. No, Vieira wasn’t referring to Clooney and gal pal Sarah Larson, but, as the televised photos of the couple together showed, Clooney and Brad Pitt. Clooney, who never unfolded his arms, said the tone of Vieira’s voice tipped him off to what she was going to say, though, when asked if, indeed, the two are having a “bromance,” Clooney would only concede that pal Pitt is “very handsome.” As for the rumor that he’s to be named godfather of Pitt and Angelina Jolie‘s children, Clooney answered, “No, but I do enjoy hearing it.”
– Stephen M. Silverman 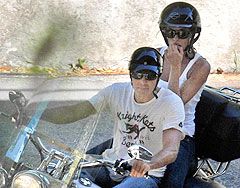