A 65-year-old German schoolteacher is a busy mother to 13 children – and she’s reportedly about to welcome four more to her burgeoning brood.

Annegret Raunigk, who’s oldest child is 44, told German newspaper Bild on April 4 that she is in her 21st week of pregnancy with quadruplets.

The Berlin native claims the pregnancy is the result of artificial insemination using both donated sperm and eggs. The pregnancy will be documented for German TV show RTL.

Raunigk told Bild that her doctor reportedly suggested selective reduction when they discovered she was having quadruplets, but she wasn’t interested.

Raunigk is no stranger to media attention. She first garnered headlines at age 55 when she give birth to her 13th child, daughter Leila. (Pictured above.) It was Leila, she claims, that inspired her to try for another child.

The teacher’s 13 children are reportedly from five different fathers. She is a grandmother to seven.

Bild reports that Raunigk is due in the summer, and that she isn’t concerned about the possible health risks for a woman her age. “I simply assume that I will remain fit and healthy,” she told the newspaper. Her doctor, who also spoke to the paper, said he is optimistic. 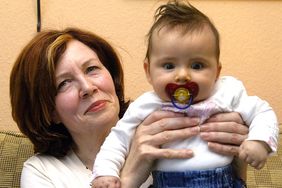 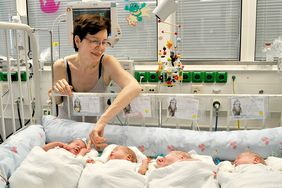