There were no signs of foul play in the death of Daniel Smith, 20, police tell PEOPLE

Daniel Smith, the 20-year-old son of Anna Nicole Smith, died suddenly in the Bahamas on Sunday, three days after the former Playboy Playmate gave birth to a girl, according to a statement from Smith’s attorney.

Reginald Ferguson, assistant commissioner of the Royal Bahamas Police Force, tells PEOPLE Daniel was visiting his mother at Doctors Hospital when he was found in her room at about 9:00 a.m. Sunday morning.

“He was found in a condition of non-responsiveness,” Ferguson says. “I am not certain who made the alarm, and doctors were called in but he was pronounced dead.”

Ferguson says police officers were called to the scene, but there was no evidence of foul play: “There were no signs of violence to the body and there has been no sign of any unusual activities in the room that he was in.”

An autopsy was being performed Monday afternoon and police were awaiting its results before determining a cause of death. Despite some newspaper reports, “We have no information about a heart attack at this time,” Ferguson tells PEOPLE.

Daniel Smith, who often appeared on his mother’s E! reality program The Anna Nicole Show, was in the Caribbean nation where his mother, 38, gave birth to a girl on Thursday, her lawyer, Howard K. Stern, said in a statement.

A statement posted on Smith’s official Web site, annanicole.com, reads, “On Sept. 7 Anna Nicole gave birth to a healthy 6 lb., 9 oz. baby girl. Her son Daniel was in the Bahamas with her to share in the joy of his baby sister when he passed away suddenly on the morning of Sept. 10.

“We have yet to learn the cause of death but do not believe that drugs or alcohol were a factor. Anna Nicole is absolutely devastated by the loss of her son. He was her pride and joy and an amazing human being. Please do not make any press inquiries at this time so that Anna Nicole can grieve in peace.”

Daniel’s father, Smith’s ex-husband Billy Smith, tells TV’s Extra of the death of his son, “It’s so sad. I hated that it happened. He was so young. I’m sort of in shock right now.” According to Extra, Billy Smith had not seen his son since Daniel was two years old and last spoke to his ex-wife in 1996.

Smith, who earlier this year won a U.S. Supreme Court decision to claim her stake in the will of her late husband, billionaire J. Marshall Howard, has not publicly named the father of her second child. 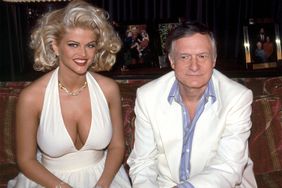