She and Brad Pitt are expecting this summer, PEOPLE has confirmed

Angelina Jolie is expecting a baby this summer with Brad Pitt, PEOPLE has confirmed. “Yes, I’m pregnant,” Jolie told a charity aid worker in Santo Domingo, Dominican Republic, Monday. The pregnancy has since been confirmed by representatives of both stars.

This is the first biological child for Jolie, 30, who is already the mother of son Maddox, 4, whom she adopted from Cambodia, and daughter Zahara, 1, adopted from Ethiopia in July.

Jolie, who has often spoken about expanding her family, added that she d like to adopt again. In October she told PEOPLE: “There’s something about making a choice, waking up and traveling somewhere and finding your family.”

She is currently in the Dominican Republic filming The Good Shepherd with Matt Damon. She is also working with Yele Haiti, a charity for the empowerment of Haitian citizens.

Pitt, 42, who recently took steps to adopt Maddox and Zahara, including changing their names to Jolie-Pitt, has talked of wanting a family for years. He has no children from his 4-year marriage to Jennifer Aniston.

In July, Pitt accompanied Jolie to Ethiopia, where she completed the adoption process for Zahara.

More recently, the couple have been spotted all over the globe, including Kenya, England, Ethiopia, Canada, Tokyo and Pakistan, where they spent Thanksgiving.

Jolie has never been happier, say friends. “This is a woman who values her relationships with her children more than anything,” a source tells PEOPLE. “Now she is creating a family in the context of an adult relationship.”

Did Brad Tell Jen About the Baby? 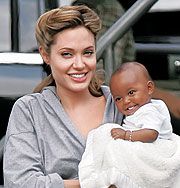