What to get the movie star who has everything? If it’s architecture buff Brad Pitt – who turns 43 on Dec. 18 – it’s a trip to Frank Lloyd Wright’s masterpiece, Fallingwater.

Angelina Jolie treated Pitt to a visit to the Pennsylvania house on Thursday, where they took a two-hour guided tour and then held a private birthday party in Fallingwater’s living room.

“Brad said he had wanted to experience Fallingwater ever since he took an architectural history course in college,” Cara Armstrong, the house’s curator of education, who led the couple on their tour, told the Pittsburgh Post-Gazette.

“He and I talked quite a bit about design and art. He was incredibly well informed about architecture.”

Armstrong told the paper the couple were “very gracious and very engaged in the house. As we say in the Midwest, you could tell their mothers raised them right.”

The famous house, in Fayette County, Pa., about 50 miles southeast of Pittsburgh, is built over the wooded Mill Run creek.

“Brad said he had a visual sense of Fallingwater,” Armstrong told the Post-Gazette, “but experiencing it in person, hearing the sound of the waterfall cascading under the house and smelling the wood from the fireplace was better than anything he could have imagined.”

After the tour, the couple headed to the living room to enjoy champagne and caviar, which Jolie had arranged to have sent in. They later invited the staff to join them.

According to the paper, Jolie told Fallingwater staff members of the birthday boy, “He’s so hard to buy for.” 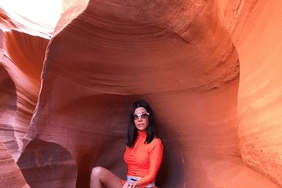