Bear Essentials: Angelina Jolie Pitt Buys an 8-Foot Teddy Bear on the Side of the Road

Angelina Jolie Pitt just couldn’t bear the idea of missing out on this sale.

The 41-year-old mother of six recently made a pit stop with her daughter Shiloh Jolie-Pitt, 10, in Toluca Lake, California, and purchased an 8-foot teddy bear from two boys hawking it from the curb, according to TMZ.

In the video captured by Tim Alexander, his twin sons encourage people to stop and purchase their giant bear. Little did they know that after an hour of unsuccessful advertising, the massive plush toy would be snapped up by the Kung Fu Panda star, who happened to be passing by in her vehicle.

And Jolie Pitt was very impressed by their sales pitch.

“You’re very good at doing your job, sweetie,” she said in the video, which included her asking one little boy, “Tell me your favorite animal.”

The boys were asking for $40, but Jolie paid them each $50, according to the report.

It took a huge effort get the giant bear into Jolie Pitt’s white Cadillac, but they managed to secure “Big Bear” in the trunk.

At one point, Jolie said, “You guys are so cool. It’s so nice to meet you,” and made sure to make some proper introductions: “This is Shiloh and I’m Angie. Nice to meet you,” she told the beaming group. 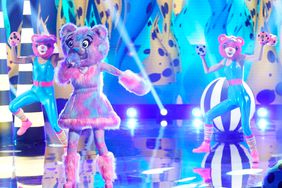