'America's Got Talent' Winner's Fiancée 'Had No Clue' About the Proposal

"He's been saying for three years he was going to propose, so I wasn't taking it so seriously," says Michael Grimm's fiancée

After America’s Got Talent winner Michael Grimm gave his now-fiancée something to sing about when he proposed to her on TV, the lucky lady says the couple have plans to celebrate – with some take-out.

“We’re locking the doors and turning off the phones, and we won’t be bothered by anybody else,” his fiancé, Lucie Zolcerova, says. “We’ll be ordering some pizza in.”

Their plans may be low-key, but the proposal was anything but, as Grimm, 30, got down on one knee during a taping of The Ellen DeGeneres Show.

“I’m ecstatic right now,” she says. “Well, he’s been saying for three years he was going to propose, so I wasn’t taking it so seriously. But I had no clue whatsoever. I was sitting there, enjoying the show and then yeah. I can’t imagine myself with anybody else. He’s my soul mate, and I love him.”

Zolcerova, 31, has been a fan of Grimm’s bluesy voice long before he beat out 10-year-old opera wonder girl Jackie Evancho on the AGT finale. The pair met three years ago, when Zolcerova saw Grimm perform with his band in Las Vegas, and what started out as groupie adoration blossomed into the real deal.

“He was great,” she says. “I bought all of Michael’s CDs, and while he was signing them, he invited me out to another event.”

And while Zolcerova may still be his biggest fan, she now has a lot of others looking for a piece of her man – and she’s okay with that.

“I don’t plan to keep them at bay,” she says of his female fans. “I think he needs to be shared with the world. People gravitate toward him naturally. He’s just a humble and genuine person.” 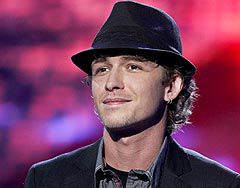 'America's Got Talent' Winner Proposes to Girlfriend – on TV!