She may have played Ugly Betty on TV, but America Ferrera glowed as a gorgeous bride when she tied the knot with longtime boyfriend Ryan Piers Williams.

The Emmy-winning actress, 27, and Williams were married Monday night in “an intimate setting amongst close friends and family,” her rep tells PEOPLE. “The bride wore a dress by Amsale’s Christos label and Fred Leighton earrings.”

The couple, who became engaged in June 2010, first met when Williams cast Ferrera in his student film at the University of Southern California.

“They aren’t one of those flashy couples,” a friend of the pair told PEOPLE in 2007 when they began looking for a home together.

“We kind of connected from the get-go on that professional level and that was something that really drew us to each other,” Ferrera told PEOPLE after her engagement, “a shared passion for what we do and our work.” 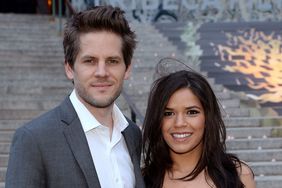