The actors wed Friday evening at the Carondelet House in Los Angeles, their rep confirms to PEOPLE exclusively.

“I could not imagine a better send-off into the rest of our lives together. Amber was beaming all night,” West, 31, tells PEOPLE. “We were surrounded by so much love.”

Adds Stevens, “It was the most magical night of my life. I wish I could rewind and play it again, but I’m so looking forward to our future together.”

The pair met on the set of the ABC Family show, playing a couple whose chemistry was evident before they filmed a single scene together.

“He came in to play my boyfriend on the show. We were introduced by the casting director, and I remember I went back to the hair and makeup room immediately and started Googling him. I was like, ‘Well, that guy was cute!’ ” Stevens, 28, said on Conan in June.

The bride, who recently guest-starred on New Girl and Criminal Minds, wore a dress by CB Couture as well as jewelry by Greene & Co. She was escorted down the aisle by her father, radio and television host Shadoe Stevens. The groom, who played Gareth on The Walking Dead, donned a J. Crew tux. The pair exchanged rings, both custom and by XIV Karats.

The duo opted for a holiday Vanity Fair theme for the wedding at the Italian-style villa, with the help of wedding planner Carly Rae Design. Fleur de Rye arranged the flowers while Cake and Art handled the cake, and Dart DJ provided the music.

Très LA catered the nuptials – which was a big job considering the couple bonded over food on the very first day they met.

“At the very end of the day was a heavy make-out scene,” Stevens told Conan O’Brien while promoting her role in 22 Jump Street. “The catering came out – and it was Indian food. And he just couldn’t resist. So he came over to me and said, ‘I hope it’s okay with you, but … I really want to eat this Indian food. But I know we have to kiss later, is that cool?’ And I was like, ‘Yes!’ ”

“I thought it was so hot that he wanted to eat,” the actress, who has her own food blog, joked. “It was really important to me that I found a man who enjoyed [eating].” 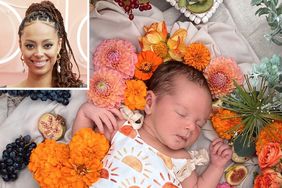 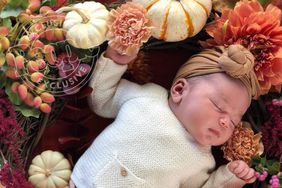 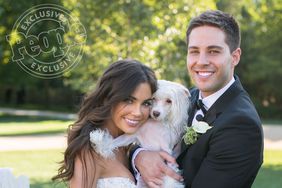