From the emerald-cut diamond ring to the bended-knee proposal, get all the details about the couple's big commitment

If you’ve got it, flaunt it.

At a private dinner on April 27, George Clooney and Amal Alamuddin showed off their newly engaged bliss – along with the bride-to-be’s new ring.

In an exclusive photo in this week’s PEOPLE, the couple joined close friends Cindy Crawford and her husband, Rande Gerber, in Santa Barbara, Calif., just five days after Clooney proposed to the stunning London lawyer, to celebrate Gerber’s 52nd birthday as well as their own happy news.

In another exclusive photo, Alamuddin has her hand resting lovingly on the back of her fiancé’s neck – providing a close-up look at her ring, which Clooney helped design. It features an ethically mined emerald-cut diamond estimated at 7-plus carats and two tapered baguettes set in platinum.

The actor had visited Dubai in March to meet his Lebanese-born, Oxford-educated leading lady’s family, spending time on a yacht excursion with her siblings, says a relative of Alamuddin’s.

“They found George very easy to get along with, cool,” the family member tells PEOPLE. “They felt at ease with him immediately.”

For much more on George and Amal’s engagement news, including a closer look at the woman who won the heart of the ultimate Hollywood bachelor, pick up this week’s issue of PEOPLE 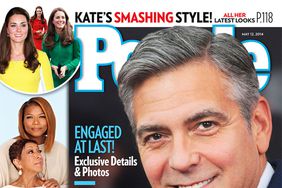 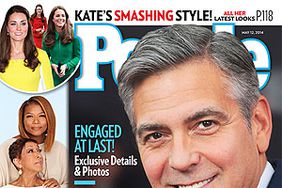 How George Clooney and Amal Alamuddin Celebrated Their Engagement 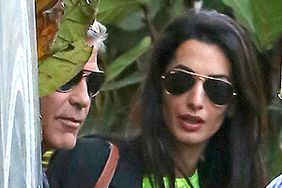 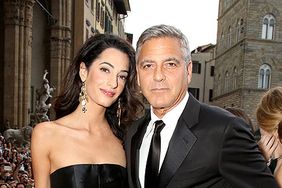 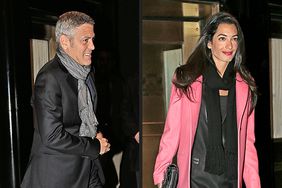