It's PEOPLE's 30th anniversary! To celebrate, we've gathered some of the most dazzling women our pages have seen over the years. Take a peek at Catherine Zeta-Jones, Beyonce Knowles and others, and see what makes them so stunning. By Lucy Maher

Zeta-Jones, 34, shot to stardom after her smoldering beauty captivated audiences in 1998's Mask of Zorro. "There's a magic that happens between her and the camera lens," Zorro director Martin Campbell says of the Oscar winner (for 2002's Chicago). Next up for Mrs. Michael Douglas (pictured in 2000): The Terminal with Tom Hanks.

South African-born Theron, 28, glowed in movies like Sweet November and The Italian Job but won critical acclaim (and a Best Actress Oscar) only after disguising her willowy frame and delicate features in 2003's Monster. Now the former model (pictured in 2000), who is dating actor Stuart Townsend, has "the whole package," director John Frankenheimer once said. "She's one of the most beautiful girls around."

Beyonce says the former Supreme's style is "never safe but always sexy and glamorous," and the same could be said for Ross herself. The legendary singer, 59, earned an Oscar nod for her emotional portrayal of Billie Holiday in 1972's Lady Sings the Blues. Sadly, twice-married Ross (pictured in 1975) is struggling with legal problems related to a DUI charge.

From her 1981 wedding to Prince Charles on, "the people's Princess" kept the world transfixed until her death at age 36 in 1997. Why? Diana (pictured in 1997) was always "the very essence of compassion, of duty, of style, of beauty," said her brother, Earl Spencer, at her funeral.

"When she enters a room, it's like somebody just turned up the lights," says screenwriter Robert Harling of Roberts, 36 (pictured in 2000). After several mid-'90s box-office flops and high-profile breakups, she landed an Oscar (for 2000's Erin Brockovich) and a husband (cameraman Danny Moder), and now enjoys a lower-key life. Next up: Closer with Jude Law.

As the Chanel suit-clad First Lady, the globe-trotting wife of shipping magnate Aristotle Onassis and the Manhattan socialite, Jackie O (pictured in 1975) maintained her strength and mystery until her death in 1994. "She was not a classic beauty," says designer Valentino, "but she was extremely striking."

"As an actress, the way you look cannot be your identity," says stylish Aussie stunner Kidman, 36. She proved it by winning an Oscar for 2002's The Hours, in which she masked her luminescent good looks. The statuesque beauty and single mom (pictured in 2003) will appear in a whopping seven films over the next two years.

She began her career at 11 months old as an Ivory Snow baby, and spent the '80s hawking Calvin Klein jeans, starring in movies and studying at Princeton – but Shields (pictured in 1981) is one of those rare child stars who has endured. "There are interesting looks," former Vogue editor Grace Mirabella said of the new mom, 38. "But these are great looks."

After five years of focusing on family in Idaho, Moore, 41, made a splashy comeback to Hollywood in 2002, dating Ashton Kutcher, 26, and baring her buff body in Charlie's Angels. Her secret? Moore (pictured in 1995) isn't "focusing on how she looks but how she feels," says producing partner Suzanne Todd. "Having done that, she's better-looking than ever."

Director Rob Reiner calls her "unbelievably beautiful," but Pfieffer, 45 – a three-time Oscar nominee, veteran of 30-plus films, mother of two and wife to TV producer David E. Kelley – isn't buying it. "The way my mouth curls up and my nose tilts," Pfeiffer (pictured in 1999) once joked, "I should be cast as Howard the Duck."

Bronx-born Lopez (pictured in 2001) is the ultimate diva – whether singing, acting (she stars next in Shall We Dance? with Richard Gere), shaking her renowned derriere or simply showing up on red carpets in barely-there wear. Lopez, 34, "is so stunning she stops you in your tracks," says Maid in Manhattan costar Marissa Matrone.

Red-carpet knockout Berry, 37, made history as the first African-American woman to win the Best Actress Oscar (for 2001's Monster's Ball). As Die Another Day costar Pierce Brosnan puts it, the twice-divorced star (pictured in 2003) has "the most gorgeous face that you just want to dive into, the most gorgeous body that you just want to embrace." Next up for Berry: Catwoman, due this summer.

She's married to Brad Pitt, has perfect hair and a killer body, and looks equally gorgeous in a Prada gown or flip-flops and cargoes. Is that all? Nope: Aniston (pictured in 2003), 35, TV's most beloved Friend turned movie star (in The Good Girl, Along Came Polly and two upcoming projects), "has a sex appeal without trying to be overtly sexy," says hairstylist Chris McMillan. "She's a golden girl, head to toe."

She first rose to the top of the pop charts as one-third of Destiny's Child, then reinvented herself with a sizzling solo career, forays into acting and romance with rapper Jay-Z. But even though the five-time Grammy winner (pictured in 2001) coined the term "Bootylicious" and helped make curvy cool again, Beyoncé, 22, says that "if I could make changes, my legs would be more muscular, I'd have a six-pack, and my waist would be smaller."

Since her 2000 Oscar win (for Girl, Interrupted), Jolie, 28, became estranged from dad Jon Voight, divorced second husband Billy Bob Thornton, adopted son Maddox and embraced her duties as UN Goodwill Ambassador. And that's just the start: The oft-tattooed stunner (pictured in 1998) has six films due this year, and will carry the torch at this year's Olympics in Greece. "She's fun, honest, intelligent, gorgeous and divinely talented," says director John Frankenheimer.

The petite blonde star, 42, has owned the TV airwaves for more than 20 years, emoting her way from Dynasty through Melrose Place and into Spin City. The L'Oreal pitchwoman (pictured in 2001) "only gets better with age," says friend Lisa Ashley of Locklear (who has a daughter, Ava, with rocker husband Richie Sambora). "I've seen her when she wakes up in the morning, and she's beautiful." 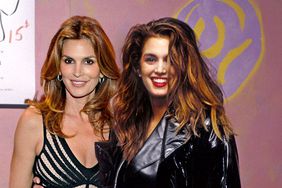