All Grown Up & Hot

Even Scarlett and Mischa had their awkward teen years. See just how far they and others (Katie! Lindsay!) have come. By Janice Morris

THEN: The Horse Whisperer star was just developing her fashion sense in '97. Her No. 1 rule: "You have to be comfortable when you're going out."
NOW: At 20, the curvy bombshell is comfortable in couture (such as this Imitation of Christ frock). "Being from New York inspires me to be different and creative with what I'm wearing," she says.

THEN: Her wide-eyed innocence startled viewers in 1999's The Sixth Sense.
NOW: Barton, 20, is one of PEOPLE's Most Beautiful. "The depths and size of her eyes, the structure of her chin, a delicate nose and soft flowing hair – all the highlights of history's most beautiful women," her O.C. producer McG says.

THEN: "I don't think she knows how beautiful she is," her Dawson's Creek costar James Van Der Beek said of the 19-year-old ingenue.
NOW: Tom Cruise does. Holmes, 27, is engaged to, and expecting a baby with, the actor – her childhood crush. "She found her happiness," says a friend. "She has everything she wants."

THEN: A white tank and necktie were the Ontario native's trademark look when she debuted stateside in 2002. "I don't go around trying to sell sex," she said.
NOW: At 21, she's engaged (to Sum 41 frontman Deryck Whibley) and embracing her "great body" – as well as her inner fashionista, modeling Gucci and Chanel in Harper's Bazaar.

THEN: The self-described "social klutz" got her big break at 16 on Dawson's Creek, and by 17 was living on her own in L.A.
NOW: Mom to 3-month-old Matilda with fiancé Heath Ledger, the Brokeback Mountain star, 26, is relishing family life. "I really feel sated," she told Entertainment Weekly.a

THEN: At her Sweet 16, Will Smith played big brother to his Fresh Prince of Bel-Air costar, saying, "She can start dating when she's 21!"
NOW: The Harvard grad, 26, is courted by Derek Luke in Glory Road and working on her seventh album. Her grown-up career, she says, meant "starting again as a changed person."

THEN: Three years ago, the tween queen – starring as Disney good girl Lizzie McGuire – was "obsessing about getting my license."
NOW: The 18-year-old pop star is in the driver's seat when it comes to a certain tattooed rocker. "I'm a sucker for her," says boyfriend Joel Madden, 26. "No one can push me around – except for her."

THEN: Before she developed her signature boho look, the Two of a Kind star, at 13, was a buttoned-down cardigan girl.
NOW: "She is so petite and delicate, yet such a strong and determined young woman," designer John Galliano told W magazine about its trend-setting January cover girl, who's 19. "Feisty. I like that."

THEN: The teen millionaire was already saying no to "ruffles or flowers" – just like her sister.
NOW: Olsen, who had her own Harper's Bazaar cover last year, still goes for a grown-up look – and older men. Since splitting last year with Scott Sartiano, 31, she's been linked to Jared Leto, 33, and businessman Greg Chait, 27.

THEN: In 2002, the former catalog model was settling into her second season as a Gilmore Girl.
NOW: Just like Rory, the 23-year-old is making time for boys (she dates Gilmore actor Milo Ventimiglia) and developing a personal style. "It's less about finding the right outfit and more about finding something fun to wear," she's said.

THEN: At 16, the "Candy" singer eschewed tight clothes ("It's not for me," she said).
NOW: Now 21, the actress (she's appeared on Entourage and will guest on boyfriend Zach Braff's Scrubs) designs clothes, for her Mblem label. And she still insists she's "not going to change to fit some stereotype."

THEN: The 12-year-old star of 1998's The Parent Trap vowed, "I don't want fame to change me."
NOW: Her hair color, at least, has changed – several times. But the natural redhead remains "an absolute knockout," says her hairstylist, Peter Butler. And those party-girl rumors? Lohan, 19, insists: "I have a younger sister, and I want to set a good example." 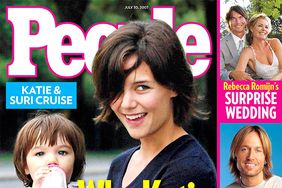