The Newsroom actress tied the knot in Los Angeles on Saturday

The Newsroom actress, 29, tied the knot with Leonard in front of family and friends in Los Angeles on Saturday, after a four-month engagement.

Pill opted to forgo the traditional white wedding gown, wearing a sheer, short-sleeve yellow dress for her special day. Pill’s short blond hair was curled and pinned away from her face, and she accessorized with a red flower pin and matching red lipstick.

Leonard, who wore a white shirt with a black tie and slacks, called the couple’s earthy nuptials the “best day of my life,” and posted a sweet photo of their first dance as husband and wife.

Leonard, 39, and the Canadian actress got engaged in January. The Bates Motel star proposed during a group hiking trip to California’s Joshua Tree National Park, he told PEOPLE in January.

Pill thought she was posing for a photo when Leonard dropped to one knee to pop the question.

“I told her that I loved her more than anybody on the planet,” Leonard said. “It was pretty good. Her hands were shaking, and so about 30 seconds after I gave it to her I said, ‘You might want to put that on now.’ ”

The If I Stay star also shared a photo showing off Pill’s beautiful, 1920s-inspired engagement ring and his thick, gold wedding band. In the sweet snap, Pill is caught munching away.

“We got married, she ate toast. @msalisonpill,” he wrote. 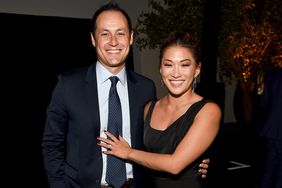 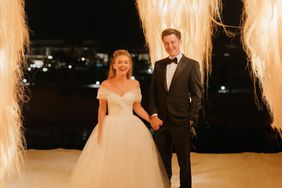