‘Tis the season for fireworks — and Alec and Hilaria Baldwin certainly brought the sparklers ahead of Independence Day weekend.

During a private, outdoor ceremony with close friends, the couple reaffirmed their love and celebrated half a decade together as husband and wife with their children by their side. According to Page Six, the event was held at the Wolffer Estate Winery in Long Island, New York.

Hilaria donned a champagne-colored, floor-length gown for the occasion, while Alec sported a black suit.

The couple, who have been married since 2012, share three children together: Carmen, 3, Rafael, 2, and Leonardo, 9 months. (Baldwin has a 21-year-old daughter, Ireland, from his marriage to Kim Basinger.)

The 59-year-old actor accidentally let the big news slip earlier this week at the New York premiere of Blind, where he told E! News: “I see what I have and I’m very lucky. We’re getting remarried on Friday.”

With the secret out, Hilaria, 33, discussed why the pair decided to renew their vows, and it had a lot to do with food!

“Basically we wanted to have a party and we wanted our friends to come,” she said. “We’re going to do something for, like, five minutes, I think, and then the rest of the time we’re going to be eating.”

Alec added, it’s an “excuse to have cake and wine.”

And while the food is definitely a perk to celebrating the occasion, it’s not the only thing they’re looking forward to.

“You think, like, once you get married, everything’s like, you’re done,” Hilaria told the Associated Press. “But it’s really good to say, ‘Hey I’m still in this.’” 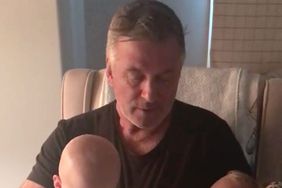 WATCH: Alec Baldwin is Dad Goals While Reading 'Goodnight Moon' to His Sons