The former Vice President has a starry lineup (Bon Jovi! Elton John!) for a 24-hour telethon on the climate crisis

When PEOPLE heard that Al Gore is planning to stay up all night Friday with Duran Duran for a 24-hour telethon on the climate crisis, we couldn’t resist asking the former Vice President: “So, are you, ahem, hungry like the wolf for action on climate change?”

“Is this a literary reference?” Gore asked.

Gently reminded that it is, actually, the British band’s hit single from 1982, Gore – who counts among his personal friends the likes of Bono and Jon Bon Jovi – quickly recovered. And with a nod toward another hot artist taking part in the Nov. 13 and 14 global broadcast of 24 Hours of Reality and Live Earth that is meant to pressure global leaders to act, Gore countered to PEOPLE: “I’m hoping, in the words of Hozier, they’ll take me to church.”

But seriously, there’s nothing funny about the urgency of the climate crisis, Gore said. And with the world’s leaders gathering in Paris on Nov. 30 for the United Nations Conference on Climate Change, Gore was gathering forces of his own – star-studded ones – to press the case for immediate action on reducing pollution and investing in clean, renewable energy.

The cast of the broadcast, which Gore will anchor from a studio set up at the foot of the Eiffel Tower, will include Duran Duran performing live from that Paris stage and these others participating from around the globe: Bon Jovi, Elton John, Pharrell Williams, Hozier, Neil Young, Fall Out Boy, Vance Joy, Walk the Moon and 30 Seconds to Mars.

Actors Ryan Reynolds, Jared Leto and Ed Begley Jr. have also enlisted, as has The Weather Channel’s Sam Champion. Segments broadcast from Miami, South Africa, Brazil, Canada, Australia, Philippines, China and India will make it a global event that will be live-streamed at www.24HoursofReality.org.

And how will the retired politician and his high-flying partners stay awake for 24 hours? Forget what you’ve heard about the wild all-night parties of rock stars. “It’ll just boil down to coffee and iced tea,” Gore says.

Gore, who was President Bill Clinton‘s two-term vice president and turned full-time to saving the environment after losing the 2000 presidential election to George W. Bush, vividly described what is now at stake for the planet.

“Man-made global warming pollution now traps as much extra heat energy in the atmosphere every day as would be released by 400,000 Hiroshima-class atomic bombs going off every 24 hours,” said Gore.

That trapped extra heat is causing epic downpours and floods, plus rising sea levels “so that in places like south Florida, high tides now put fish from the ocean into city streets,” says Gore.

For those who still deny that climate change is real and man-made pollution is to blame, Gore says the truth is winning out. “Every night on the television news is like a nature hike through the Book of Revelations,” Gore says. “So more and more, people are connecting the dots.”

And how does he feel about the climate-change deniers running for the 2016 Republican presidential nomination? Leading GOP candidate Donald Trump, for example, flatly told radio host Hugh Hewitt in September: “I am not a believer in global warming.”

Gore would not bite. “I’ve managed to stay out of the presidential political punditry,” he says.

And he’s going to keep it that way. 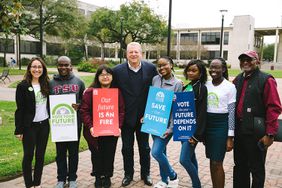 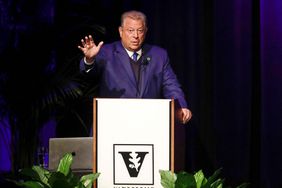 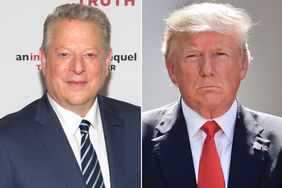 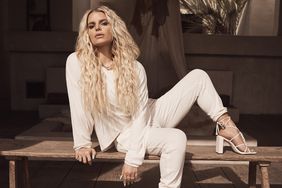