She was a stunning presence on stage at the TD Garden on Wednesday and Thursday evenings, but Adele also knows how to have fun during her off-hours.

Along with her son Angelo, 3, the superstar headed over to LEGOLAND Discovery Center at Assembly Row in Somerville, located just outside of Boston.

“They went in as regular people and went around the attraction,” a representative for LEGOLAND tells PEOPLE about the low-key star. “They requested no photos.”

The mother-son duo continued the fun during their time in the Bay State by heading to the Franklin Park Zoo in Boston, where they checked out the Masai Giraffes in the Giraffe Savannah and even fed the animals.

RELATED VIDEO: What Is the Secret to Adele’s Relationship with Simon Konecki?

She also managed to fit in some retail therapy while in town, heading to Boston’s Copley Place for a little shopping. While at the mall, the star took a break from browsing and was spotted riding the carousel with her son.

“She doesn’t like using a nanny very much although she does have on who travels with her,” a source close to the star told PEOPLE last month. “For the most part, Angelo is always with her. She’s really hands-on.”

•With reporting by JULIET PENNINGTON 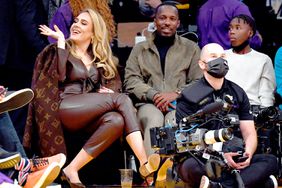