The radiant redhead from Dublin was a Hollywood star since 1939

Maureen O’Hara, the Dublin-born screen beauty whose fiery red hair, green eyes and peaches-and-cream complexion helped to enrich such classics as Miracle on 34th Street and The Parent Trap – and famously held her own alongside John Wayne – died Saturday in her sleep, her family told the Irish Times.

“It is with a sad heart that we share the news that Maureen O’Hara passed away today in her sleep of natural causes,” her family said in a statement to the Times.

She died in her Boise, Idaho, home, the family said.

“Maureen was our loving mother, grandmother, great-grandmother and friend. She passed peacefully surrounded by her loving family as they celebrated her life listening to music from her favorite movie, The Quiet Man,” the family said in its statement.

A radiant Hollywood presence since 1939, O’Hara – born Maureen FitzSimons – was one of the last remaining names from Tinseltown’s Golden Era. Later in life she also took on other giant roles: CEO of Antilles Air Boats, which flew tourists around the Caribbean islands, and owner and columnist of the Virgin Islander, a monthly tourist magazine that was sold in the U.S. and British Virgin Islands.

Indeed, her own life would have made a wonderful movie.

The second of six children born to Charles (a high-fashion clothier) and Marguerita (an actress and operatic contralto) FitzSimons, O’Hara began acting at age 6 and joined the renowned Abbey Theatre at 14.

Two years later she was unsuccessfully screen-tested in London (“I was mad as hell and disappointed by the whole unprofessional event,” she wrote in her 2004 memoir ‘Tis Herself, though by chance it was seen by actor Charles Laughton.

Intrigued by her looks but not by the name FitzSimons, Laughton suggested she change it, possibly to O’Mara – just as he suggested she be cast opposite him as the orphaned Mary Yelland in director Alfred Hitchcock’s British-made 1939 Jamaica Inn.

That same year, Laughton also guided her toward R.K.O. for her first Hollywood movie, again opposite him: the classic The Hunchback of Notre Dame, in which he was the tragic Quasimodo and she was the beguiling gypsy, Esmeralda.

Once in California, O’Hara starred with virtually all of the marquee names of her day: Tyrone Power, Henry Fonda, James Stewart and, of course, her great friend John Wayne. “He was a fine actor,” O’Hara, who stood 5’8″, told PEOPLE in 1991, when she played the bossy mother of the John Candy character in Only the Lonely (her last role), “and he matched me.”

In all, O’Hara and “Duke” Wayne made five films together, including director John Ford’s 1950 Rio Grande and his enduring 1952 The Quiet Man.

For many years she made an annual pilgrimage to Wayne’s birthplace in Iowa, where tribute was paid the screen hero, but in 2013 she announced that it would be her last visit.

As reported by the Irish Times, she said that “after 75 years as a performing artist, it’s time to start taking my final bows.”

O’Hara’s first collaboration with the legendary Ford was for 1941’s Best Picture Oscar winner How Green Was My Valley, in which she played Angharad, the daughter in a Welsh mining family.

Though action roles, in which she generally played the love interest of some swashbuckler, were to follow, in 1947 she was fitted for a business suit as a Macy’s executive and indelibly cast as the overly protective mother who – at first – didn’t want her daughter (Natalie Wood) to believe in Santa Claus. The picture became a holiday perennial, Miracle on 34th Street.

O’Hara – and her hair and complexion, a classic Irish combination – was known as the “Queen of Technicolor.”

Off-screen, though she and Wayne were never romantically involved, he was clearly her ideal man, family members told PEOPLE, and in a Turner Classic Movies interview with Robert Osborne aired in 2014, the star herself said, “Who would prefer anybody to John Wayne?”

O’Hara’s first marriage, to director George Hanley Brown, was annulled; her second, to director William Price (father of her only child, daughter Bronwyn Bridget), ended in divorce in 1952.

Then came true love: In 1956, on her first flight back to Ireland since the end of World War II, O’Hara met the debonair pilot-in-command, Charles Blair, an Air Force hero who held a transatlantic flight record.

At the time, he was married and the father of four, so he simply became friends with O’Hara. But in 1967, after he had divorced, he and O’Hara had dinner alone – and married one year later.

Within five years, after making TV’s 1973 The Red Pony, “Maureen gave up everything just to be a good wife,” her brother Charles FitzSimons told PEOPLE.

Her final performance was in The Last Dance, a 2000 TV movie.

Together the Blairs ran Antilles Air Boats from their home in St. Croix, in the Virgin Islands, building it into a 27-plane commercial fleet ranging the upper Caribbean and grossing $5 million a year.

Marriage and partnership ended tragically in 1978, however, when the amphibious aircraft Blair was flying developed engine trouble and crashed in the sea, killing him.

“I didn’t have time to sit in a corner and cry,” O’Hara told PEOPLE. “I was left with an airline to be run and 165 employees to be paid every week and 125 scheduled flights a day, which had to be flown.”

Having become the first woman to run a U.S. airline, O’Hara sold controlling stock the next year to Resorts International, though she remained as company president until 1981.

A year earlier, she sold the Virgin Islander magazine to Gannett publishing, then split her time between her 25-acre estate overlooking Ireland’s Bantry Bay and her home in St. Croix.

Writing in her memoir about the death of John Wayne, which preceded that of her husband Charles’s, O’Hara admitted she thought, “What a hell of a game of chess must have been played by Charlie and Duke in heaven that night. And then I said, ‘Good-bye, you two bastards … please miss me.’ ”

“My first ambition was to be the No. 1 actress in the world,” she said in 1999, according to the Associated Press. “And when the whole world bowed at my feet, I would retire in glory and never do anything again.”

“Her characters were feisty and fearless, just as she was in real life,” the family said in its statement. “She was also proudly Irish and spent her entire lifetime sharing her heritage and the wonderful culture of the Emerald Isle with the world.”

The family continued: “As much as Maureen cherished her privacy, she always appreciated the expressions of good will from people around the world and from all walks of life.

“She especially loved it when children recognized her from her role in Miracle on 34th Street and asked her: ‘Are you the lady who knows Santa Claus?’ She always answered: ‘Yes I am. What would you like me to tell him?’ ”

Jessica Chastain, a fellow “tough redhead broad,” on Saturday shared her condolences at O’Hara’s passing: “RIP #MaureenOHara from one tough redhead broad to another. Thankful for the light you shared,” she wrote on Twitter.

In 2011, O’Hara was inducted into the Irish America Hall of Fame , according to the Times.

In 2014, she was awarded an honorary Academy Award inscribed with, “To Maureen O’Hara, one of Hollywood’s brightest stars, whose inspiring performances glowed with passion, warmth and strength.”

She will be buried at Arlington National Cemetery, in Washington, D.C., alongside her husband, a U.S. Navy pilot, according to the Times.

“For those who may ask what they can do to honor Maureen,” the family said in its statement, “we have a simple request: visit Ireland one day and think of her.” 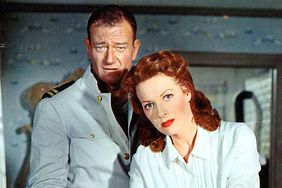 After Her Flying Hero Husband Dies in a Crash, Maureen O'Hara Fights to Keep His Dream Aloft 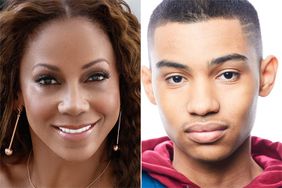