Aaron Carter's Engagement Is Over

Peniche tells PEOPLE she and the House of Carters star made the “mutual decision” on Friday. “He’s really young and just needs to get his act together,” she says. “I don’t know what’s going on right now. We’re friends and maybe we’ll get back together sometime. We haven’t ruled out getting back together.”

Carter’s rep confirmed the split, telling PEOPLE, “He decided he had made a mistake. He’s young and got caught up in the moment. He hopes they can be friends.”

Carter, 18, popped the question in Las Vegas on Sept. 16, while he and Peniche were sharing the stage in front of 200 audience members during the Playboy Comedy Tour at the Palms Casino Resort.

Carter’s proposal caught Peniche by surprise. “He said he was going to do it, but we thought he was kidding,” Playboy tour producer and comedian Cort McCown told PEOPLE at the time. “He was really nervous.”

Peniche, 22, was named Miss United States Teen 2003, but was stripped of her title after posing for Playboy. 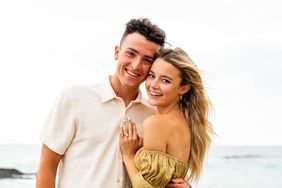