The Apprentice star and new dad tells PEOPLE, "it's a beautiful baby"

Of his wife Melania, Trump said, “I just think she’s looking forward to being a great mother. I have no doubt how good she will be.”

The news of the birth was first announced on MSNBC’s Imus in the Morning, where Trump did a telephone interview. “I continue to stay young, right? I produce children, I stay young,” said the father of five. He already has four children by his two former wives, Ivana and Marla.

Trump was a bit taken aback by the initial news that his new wife was expecting, the couple told PEOPLE last January. “He came home (one day last August), and I told him he’d be a daddy,” said Melania, 35, with a laugh. “And his reaction was … at first he needed to take it in. It was a real surprise. And then he was very happy.”

Correcting his wife, Donald said: “I expected we were going to have children, so I wasn’t totally surprised. But I was surprised by the speed of it. It happened very quickly.” (The Trumps were married in a lavish ceremony in Palm Beach on Jan. 22, 2005.)

For the first few months, Melania plans to stay close to home. But eventually we will take the baby with us,” she told PEOPLE. Though she hopes to resume her modeling career, she says she’ll be picky about assignments, taking only the ones “that I’m passionate about.” Whether she’s working or not, Melania has already hired a full-time nanny. 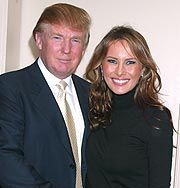 Melania and Donald Trump: Not your average Parents-to-be