A Boy for Gallagher and Girlfriend

High-living Oasis singer Liam Gallagher, 28, and his girlfriend, former All Saints star Nicole Appleton, became parents of a baby boy, Gene Appleton Gallagher, at 1 p.m. Monday in London, according to a statement issued by his publicist. The baby weighed 6 lb. 13 oz. “Both mother and son are doing very well, and the new parents are thrilled at his safe arrival,” the statement said The child is Appleton’s first and Gallagher’s second. He has a 22-month-old son, Lennon, with ex-wife Patsy Kensit, whom he divorced last year. (Barely two months after Liam’s separation announcement, Liam’s bandmate brother, Noel, 33, announced in September 2000 that he was splitting from his wife, PR professional Meg Mathews, 34. They have a daughter, Anais, who is now 18 months old.) Appleton was previously engaged to English singer Robbie Williams, 25. 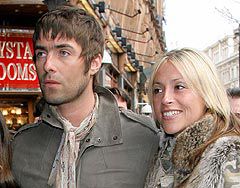