When the Twin Towers came down in the 9/11 attacks 15 years ago, Hillary Clinton was a junior senator from New York and Donald Trump was still a New York business mogul.

Both Clinton and Trump – who are now the two major-party nominees for president – visited Ground Zero in the days following the terrorist attacks and responded to 9/11 and its immediate aftermath in very different ways.

Clinton made frequent trips to Ground Zero in 2001 and photos and tapes from that time capture her outrage and anguish over both the attacks and the U.S. government’s response to them. Those tapes were revisited by The Guardian and WNYC in a retrospective published Friday on Clinton’s response to 9/11. WNYC’s Andrea Bernstein says Clinton “worked tirelessly on the recovery, became a champion of first responders and a supporter of the war in Iraq.” Listen below.

Clinton, who was in Washington, D.C., at the time of the attacks, visited Ground Zero on Sept. 12, 2001, the day after the attacks, with then-N.Y.C. Mayor Rudy Giuliani. First responder Richard Alles recalls the moment a stunned Clinton proclaimed at Ground Zero, “This attack on New York is an attack on America, it’s an attack on every American.”

Alles tells The Guardian now that he was most struck by Clinton’s “compassion.”

“She really went out of her way to speak to the first responders on the site to reassure them,” he says. “I never forgot it.”

Alles was also impressed, The Guardian writes, “by how Clinton quickly grasped the potential health risks of Ground Zero, and how doggedly she pursued treatment for those who suffered.” “We all knew from the get-go that the air was contaminated,” Alles says, “but we had a job to do so we kept on working. Senator Clinton was at the forefront over dealing with it, she showed herself to be a fighter.”

9/11 survivor Lauren Manning was also touched by Clinton’s warmth and empathy when the then-senator visited her at the Burke rehabilitation hospital in White Plains, New York, a few months after the attacks that burned 83 percent of Manning’s body.

Manning, who delivered a keynote speech about Clinton at the Democratic National Convention in July, tells The Guardian how Clinton “embraced me as best she could.” “She was kind and gentle, and she very specifically said to me that she was here for me and that she would remain at my side.”

Clinton would go on to earn widespread praise for her early efforts to help secure medical benefits for first responders who became ill after 9/11. Clinton was fighting for the cause as the Bush administration, the head of the EPA at the time, Christine Todd Whitman, and Mayor Giuliani continued to insist that the air at Ground Zero was safe for first responders to breathe. Ben Chevat, chief of staff to congresswoman Carolyn Maloney of New York on 9/11, tells The Guardian, “It took Clinton to put a spotlight on the issue and change the frame.”

Details on Trump’s 9/11 response are less certain. According to The Washington Post, New York Newsday reported in its Sept. 14, 2001 paper that Trump visited Ground Zero on Sept. 13, two days after the attacks:

“The workers are so worn out that they barely glance at the sight of Donald Trump, every hair in place and impeccably dressed in a black suit, pressed white shirt and red tie, walking into the plaza with his cellular phone to his ear.
‘No, no. The building’s gone,’ he says into the phone.”

That same day, Trump was interviewed on the outskirts of the site by a German television station. Telling the reporter he had just visited Ground Zero, Trump said, “I’ve never seen anything like it – the devastation, the human life that’s been just wasted for no reason whatsoever. It is a terrible scene. It’s a terrible sight. But New Yorkers are very strong and resilient, and they’ll rebuild quickly.”

When the reporter asked Trump whether he would assist in rebuilding the area, the real estate mogul replied, “Well, I have a lot of men down here right now. We have over 100 and we have about 125 coming. So we’ll have a couple of hundred people down here. And they are very brave and what they’re doing is amazing. And we’ll be involved in some form in helping to reconstruct.”

It’s unclear whether Trump’s workers did in fact help reconstruct the site.

Trump has spoken about 9/11 multiple times throughout his 2016 campaign.

The Washington Post reported in April that Trump said he “helped a little” with clearing rubble at Ground Zero.

“Everyone who helped clear the rubble – and I was there, and I watched, and I helped a little bit – but I want to tell you: Those people were amazing,” Trump said at a campaign event in April. “Clearing the rubble. Trying to find additional lives. You didn’t know what was going to come down on all of us – and they handled it.”

The Post reached out to Trump’s campaign for clarification on the remarks but apparently never heard back.

Trump has also said he was in his Manhattan apartment at the time of the attacks, ABC News reports. “I have a window in my apartment that specifically was aimed at the World Trade Center, because of the beauty of the whole downtown Manhattan. And I watched as people jumped, and I watched the second plane come in,” he said during a campaign stop in Columbus, Ohio, in November 2015. “Many people jumped, and I witnessed that. I watched that.”

And of course, Trump faced widespread backlash for his claims this year that he witnessed “thousands and thousands” of Muslims in New Jersey celebrating the attacks after 9/11. This has been repeatedly debunked.

The Associated Press reported Friday that Trump “has said he donated construction equipment to the recovery effort and gave $100,000 to the memorial after touring it for the first time earlier this year.”

Clinton and Trump have agreed not to campaign on the 15th anniversary of the attacks this Sunday. Clinton will be visiting Ground Zero on Sunday “to pay her respects,” a campaign aide confirmed Friday. 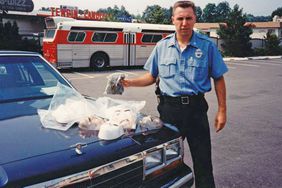 The Killer You Never See: Police Are Dying by Suicide More Often Than in the Line of Duty — Why? 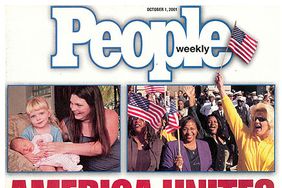