Lauren Cohen of Paramus, New Jersey, will turn 60 next month – but her birthday present has already arrived: newborn twins.

The accomplishment equals the world record set by an unidentified British woman on Christmas Day 1993. Cohen is also the oldest American woman to bear twins.

“I don’t feel like a record holder,” she tells PEOPLE. “Except for arthritis, I’m in excellent shape.”

Still, she’s not encouraging other women her age to become mothers. “I don’t think it’s right to have a baby when you’re close to 60 unless you’re in an unusual situation like mine where you have a younger spouse who you can feel fully confident will be an involved parent,” Cohen, who gave birth to a girl, Giselle, and a boy, Gregory, at New York-Presbyterian Hospital/Columbia on May 22, told the Bergen, N.J., Record.

Cohen married Frank Garcia, a man roughly 20 years her junior, four years ago, and says she was worried about what would happen if she died first. “I didn’t want him to be alone,” she tells PEOPLE.

Cohen and Garcia are also parents to daugher Raquel, 18 months, whom they conceived via in vitro fertilization using donor eggs.

Cohen, who also has a 27-year-old daughter, Ren e, by an earlier marriage, said she wanted Raquel to have a sibling. The October after Raquel’s December 2004 birth, the couple used extra embryos from that IVF treatment to conceive again.

Cohen – an attorney who works out of a ground-floor office in her two-story clapboard house – says she never discussed having children with Garcia, but sensed he wanted to be a father.

“I just thought it would be unfair to Frank for him to marry me and never have the opportunity to have a child,” she told the Record. “He never asked me to have a child, but I knew it would make him happy.”

That he seems to be. “Lauren has guts. She’s amazing,” he told the New York Post. “It was one of my dreams to have baby twins. It’s like a miracle.”

Plus, Cohen told PEOPLE, “Frank will be a nurturing, hands-on father.” 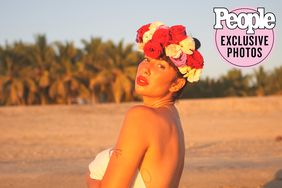