Is it the new 30? Check out Teri Hatcher, Courteney Cox, Sandra Bullock and other stars who are as sexy as ever at 40. By Janice Morris

Turned 40: Dec. 8
After taking time off to raise daughter Emerson, 7, the Desperate Housewives star says she's grateful for her comeback as Wisteria Lane's neurotic single mom – and she isn't afraid to show some skin. "I welcome the racier scenes," she says. "I haven't had to change a thing about my life to get in shape for this, as evidenced by the 20 minutes I spent waiting in line last night to buy four cupcakes, three of which I ate."

Turned 40: Dec. 4
"You have to have a certain confidence that comes across on the screen," the brunette beauty has said. Hers came through in her strong turn in 2002's In the Bedroom, and most recently in her portrayal of a single mom who kicks Jude Law's wandering Alfie to the curb.

Turned 40: July 30
"I got the whole package!" the Kill Bill star tells InStyle. "My booty's kind of tight, right?" A former high school cheerleader who until recently was dating rapper 50 Cent, Fox never shies from showing her assets, whether she's partying with P. Diddy or attending a charity event in Oscar de la Renta with "bling from head to toe."

Turned 40: Feb. 5
For her role as a 1950s housewife in Kinsey, Linney had to age herself. "I walked away from my Pilates machine," says the actress, who gained 22 lbs. But Linney, who divorced actor David Adkins in 1999, dropped it all for a younger man: Topher Grace, 26, who plays her love interest in P.S. "It was daunting enough acting opposite her in every scene," says Grace. "She's so good."

Turned 40: July 26
What wisdom has 40 brought to Bullock? "Time management is really important," says the Miss Congeniality star, who makes space in her schedule for boyfriend Jesse James, 35, a motorbike builder and host of Discovery Channel's Monster Garage. "I work really hard. And I also play really hard."

Turned 40: June 15
Two days before her 40th birthday, Courteney Cox welcomed her favorite gift: baby daughter Coco (with husband David Arquette). She's "the best thing that I've done for sure," says the former Friends star, who credits breastfeeding for helping her get her slim figure back. "Courteney is warm, caring and generous," says actress Christina Applegate. "All the perfect qualities of a mother."

Turned 40: Nov. 11
With beau Harrison Ford and son Liam, 4, "I think I'm probably the happiest I've ever been," says Flockhart, who once drew criticism for being too thin. Now the former Ally McBeal actress, who runs, takes walks with her son and plays in the park, has found a healthy balance. "I chase Liam a lot," she says.

Turned 40: June 22
She plays a tough family court jurist on CBS's Judging Amy, but at home her life is all about 3-year-old daughter Charlotte and director husband Brad Silberling (who she says looks a bit like Orlando Bloom). Brenneman's only complaint? "Before my daughter, my breasts were a little bigger," says the actress. "I'm not vain, but I'd like them to be a little bigger and better."

SARAH JESSICA PARKER
Birthday: March 25
With Sex and the City in syndication, she'll always be fabulously single and thirty-something as Carrie Bradshaw – but in real life, Parker is focusing on being mom to 2-year-old James Wilkie (with husband Matthew Broderick). "Having a child changes you," she says. "Before him, I would have sacrificed myself completely for my work." 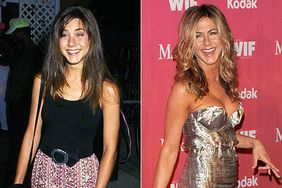