The actor behind Kenneth the Page loved costarring with the songbird

‘s Jack McBrayer may fantasize about dating Mariah Carey in the diva’s new music video for “Touch My Body.” But, it turns out, the two have something major in common. “She’s a comedy nerd,” McBrayer, who plays Kenneth the Page on the hit NBC show, tells PEOPLE at WonderCon in San Francisco. In the cheeky video clip, the geeky star gets to romp on a bed with Carey and even walk a unicorn down the street. “It’s the craziest thing ever,” he said of the experience. “It was the most surreal thing ever.” While the video depicts Kenneth’s fantasy date with the songbird, the comedian says that working with the pop star was nothing less than a dream come true – and not just because she told him she’s a big 30 Rock fan. Returning the compliments, he raves, “She was awesome! She was fantastic!”
– Brian Orloff and Kristin Luna 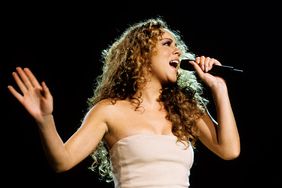