Who Is Warsan Shire? 5 Things to Know About the Poet Who Inspired Beyoncé's 'Lemonade'

In 2014, Warsan Shire was named the first Young Poet Laureate of London

Beyoncé‘s Lemonade may be a visual album but it still has fans hanging on to the singer’s every word – thanks in part to the award-winning poetry of 27-year-old Somali-Brit Warsan Shire.

Shire, a writer who was born in Kenya to Somali parents and raised in London, is by no means an unknown. But the prominent role her work plays in Beyoncé’s headline-making album (Shire is credited with “film adaptation and poetry”) has landed her in the global spotlight.

Lemonade dips into the well of Shire’s previously published poems like “the unbearable weight of staying – (the end of the relationship)” for its exploration of infidelity, family and the black female identity.

“I don’t know when love became elusive. What I know is: no one I know has it,” Beyoncé says in a voiceover in the visual album, quoting lines directly from Shire’s “the unbearable weight of staying.” “My father’s arms around my mother’s neck, fruit too ripe to eat. I think of lovers as trees growing to and from one another. Searching for the same light.”

So while you’re playing Lemonade on loop, take some time to get to know the woman behind the words.

2. The Kenyan-born Shire often explores such issues as refugees, immigration and the African diaspora in her work.
She visited her parents’ native Somalia a few years ago, where she was welcomed with open arms. “Anyone I was introduced to would point to the ground and say ‘dhulkaan waa dhulkaaga,’ this land is your land,” she said in a 2013 interview with the blog Africa Writes. On why the poetry of Somali women has not received the same level of canonization that many male poets have received, she replied simply, “Patriarchy.”

3. Benedict Cumberbatch is also a fan of Shire.
Beyoncé isn’t the only celebrity admirer of Shire’s work. Last year, Cumberbatch starred in a video for Save the Children’s Help Is Coming campaign, which supports the relief efforts for young refugees from Syria and nearby countries. He began his message with lines from Shire’s poem “Home”:

“No one leaves home unless home is the mouth of a shark. You only run for the border when you see your whole city running as well. You have to understand that no one puts children in a boat unless the water is safer than the land.”

4. “She’s not interested in being the writer of the moment,” Nick Makoha, a British poet who has worked with Shire, tells The New York Times.
Shire has laid low since Lemonade made its big splash on HBO last Saturday. She broke her silence on Twitter Tuesday night, tweeting a link to the album and writing, “yosra i hope you’re proud of us.” Yosra El-Essawy, a friend of Shire’s and Beyoncé’s official tour photographer, died of cancer in 2014. The New York Times writes that El-Essawy “served as an early link between the worlds of the young British poet and Queen Bey.”

5. Shire is expected to release her first full poetry collection, Extreme Girlhood, in the next year or so.
The writer has published chapbooks of poetry, including 2011’s Teaching My Mother How to Give Birth and 2015’s “Her Blue Body” – both of which sold out on Amazon.com within hours of Lemonade‘s release. But like many stars of today, Shire first established a strong following by sharing her work on Tumblr and Twitter.

And it seems she can now count the Beyhive among her biggest fans. 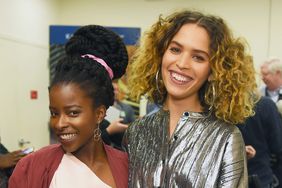