In a candid, tell-all autobiography, MMA fighter “Rowdy” Ronda Rousey opens up about losing her dad to suicide at age 8, training as a judo fighter (mom AnnMaria De Mars was the first American to win the judo world championship), and her lowest lows, including an addiction to Vicodin. The new book, My Fight / Your Fight, hits bookstores Tuesday. Here are five things you may not know about the reigning UFC bantamweight champion.

1. She was the Maxim September 2013 cover girl and appears in this year’s Sports Illustrated swimsuit issue.“The second I got that call [from SI] I was thinking, ‘Should I go for boobs or abs?’ I decided to go for boobs; it seemed like a good decision,” she tells PEOPLE.

2. Ronda and Furious 7 star Vin Diesel bonded over a shared love of video games.“Vin likes a particular video game that I also like and we would play together,” says Rousey. “We bonded over that, we would hang out and play video games. And [when Paul Walker died] I just tried to be one of those silent supporters that are there just in case he needed anyone during that time. He really was devastated.”

3. Dancing with the Stars changed her life.“I have a couple friends, Mark Ballas and Derek Hough, that are on Dancing with the Stars, and I came to the finale one year and I didn’t think that it would change my life, but I noticed the heels the girls wore, the toe is flexible but the heel is rigid, and my first thought when I saw them was, ‘I could totally fight in those heels!’ So when Furious 7 came around, since it was a long, extensive fight scene in heels with Michelle [Rodriguez], I actually had them order ballroom dancing shoes!”

4. She is in the new Entourage movie.“It’s funny, they are very much the fun-loving, cool guys that you see in the show. It’s just there’s not that dynamic of, there’s Vince, and then there is all of them. They’re all Vinces. It’s [in person] pretty much Entourage but all of them are Vince.”

RELATED VIDEO: The Entourage–Star Wars Mash-up You Never Knew You Needed in Your Life

5. Ronda has always known she would write an autobiography, and she held nothing back.“I always had it in my mind that I was going to write one. Even when I was going through the worst times, I was telling myself that ‘This is just the really interesting part of the autobiography for you, when the protagonist is down and out.’ That was my pep talk to myself. And I didn’t really ever fear being honest; no one could really criticize me for anything that I put in there, because it’s the truth. I’m sure some things in there even my mom learned about me.”

Rousey is on the cover of this week’s Sports Illustrated, on newsstands Wednesday. 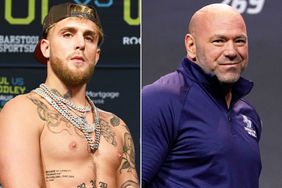 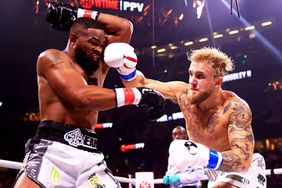 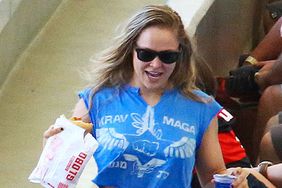