A Chicago author who was inspired by Ernest Hemingway and co-wrote a book about surviving the running of the bulls underwent surgery Wednesday after he was gored in the thigh by one of the animals during the annual event in Pamplona, Spain.

Bill Hillmann, 32, who doctors said would have died had the injury been less than half an inch closer to an artery, is “OK,” his wife, Enid Mruiz, wrote on Facebook. He will be hospitalized in Pamplona for three or four days, but “everything seems fine,” said Mruiz, who is with him in Spain.

Hillmann, along with Hemingway’s grandson, John Hemingway, wrote Fiesta: How to Survive the Bulls of Pamplona, which came out three weeks ago. He told the Chicago Tribune that he was pushed during the chaotic event and fell simultaneously with a 1,300-lb. black bull, which jammed its horn through his leg.

“When I fell, the bull fell with me and gored me in one motion,” he said from his hospital bed. “The horn went in one side of my thigh and exited the other side and he pulled it through.”

Hillmann, who estimated the injury was between the size of a golf ball and baseball, was lucky, though. “They said it was a centimeter away from my femoral artery, and if it had hit that artery I would have died,” he told the Tribune.

In addition to Hillmann, a Spanish man also was gored Wednesday during the San Fermin festival, the annual stampede when bulls run through the narrow streets alongside runners in white outfits and red scarves. Later in the day, the bulls enter the ring for bullfighting, where they are killed. Ernest Hemingway’s 1926 novel The Sun Also Rises depicted the town’s bull running and bullfights.

This was Hillmann’s 10th trip to run with the bulls, a passion inspired after he read Hemingway’s book in his early 20s, said Victor David Giron, president of Curbside Splendor Publishing, which published Hillmann’s novel, The Old Neighborhood, in April.

“He’s an adrenaline-junkie-type guy and wanted to experience that,” Giron told PEOPLE.

It already had been a rough trip to Spain. Last week, Hillmann was robbed on a train and his laptop, passport and wallet were stolen, Giron said.

Despite the injury, Hillmann is a “fighter” and likely will turn his experience around, Giron predicts. “It will be fodder for his writing in the future,” he said.

Indeed, Hillmann plans to take on the bulls again next year. Giron’s not surprised: “He’s a larger-than-life character.” 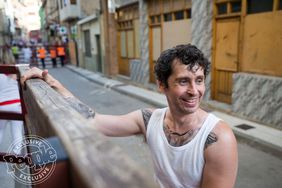 Man Gored 3 Years Ago Gored Again by Bull in Spain, but He Still Plans to Continue Running 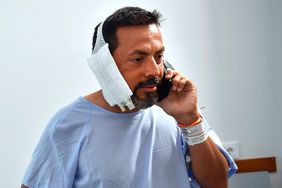 Red Wine, Hemingway and Me

Call of the Wired