The handsome Frenchman is 39, married with children – and on a winning streak

Jean Dujardin likens his high recognition factor in his native France to living “in a big village,” but with the accolades he’s now receiving for his work in The Artist, the handsome actor had better get used to having fans in America.

“I am thrilled. I am proud. I am over the moon,” Dujardin, speaking in French, told PEOPLE about his Golden Globe and Screen Actors Guild nominations for his role as a screen star in the silent, black-and-white pastiche about Hollywood’s bumpy transition from silent movies to talkies.

“I’m incredibly surprised. And every day there are new awards, and it’s so unbelievable.”

The honors have been raining down all year. In the spring, Dujardin, 39, was named best actor at the Cannes Film Festival for The Artist – a turn of events he says that he wishes never happened.

“I was thrilled, proud, and very scared,” he says. “I didn’t want to go to get the prize because it’s not my job and because I’m very shy. It’s a little irrational, because you never think of the prizes. I haven’t had many. I still don’t know if I really received it, in fact.”

PHOTOS: See the Stars As They Hit the Red Carpet

Growing up in the suburbs of Paris, Dujardin didn’t get into acting until he was 24, when he started writing stand-up comedy sketches in bars. He then graduated to performing sketch comedy on TV and had a huge hit with the series Un Gars, Une Fille.

That led to film roles, including for a series of spy spoofs directed by Michel Hazanavicius (who’s also responsible for The Artist), and Dujardin is currently France’s second highest-grossing star, after Oscar winner Marion Cotillard.

For his previous roles, Dujardin has been likened to Jim Carrey, on account of his expressive face, but for The Artist he also channels such athletic Hollywood matinee idols of the past as Gene Kelly and Douglas Fairbanks, and the lover, John Gilbert.

So, PEOPLE asked, what was it like playing a silent film role?

“For the audience it’s a silent movie, but for us it’s a talking movie. We had lines,” Dujardin says. “We spoke in French and English and sometimes gibberish. There was noise on set. It was not a silent set. It was more instinctive. Not intellectual. Your body does the work.”

Currently living in Paris with his wife, comedian Alexandra Lamy, Dujardin has two sons and his wife has a daughter, all from previous relationships.

And while he appreciated being able to go unrecognized while he was shooting The Artist in Hollywood, George Clooney recently gave him some pointers for navigating the awards season now that he’s in the American spotlight.

“His advice was to learn English. It will help you through this,” says Dujardin. 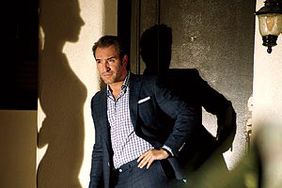 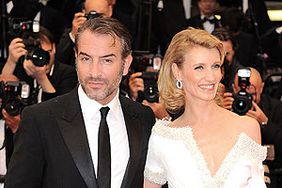 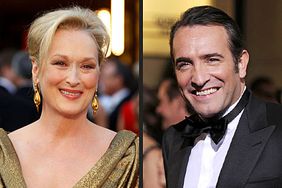