Some celebrities used the ceremony, sponsored by Lindt Chocolate, to pay special tribute to loved ones

During Blunt's acceptance speech for outstanding performance by an actress in a supporting role for the film A Quiet Place, the actress sent a special shoutout her husband and director of the film: "I’m going to share this completely with my husband John Krasinski, because the entire experience of doing this with you has completely pierced by heart directly. You are a stunning filmmaker, I'm so lucky to be with you and to have done this film with you."

The Ozark star gave a sweet nod to his wife and kids during his acceptance speech for outstanding performance by a male actor in a drama series: "I would like to say specifically though to my wife, my two daughters, Amanda, Franny and Maple, without you, none of it would be enjoyable and it probably wouldn’t be possible. I love you more than I even tell you I do and I’ll be home for kisses so don’t go to bed. Amanda, pop a mint, I’m going to come give you yours in about five minutes."

Gaga and her fiancé Carino shared a sweet kiss during the show.

Emma Stone and Her Boyfriend Make a Rare Public Appearance

Stone chose the SAG Awards to show off her low-key relationship with boyfriend and SNL Director Dave McCary.

Black Panther costars Jordan and Nyong'o are strictly friends, but fans still wish they were something more, as Twitter proved Sunday night. The two were spotted smiling and having fun throughout the night.

Sterling K. Brown and His Wife Celebrate a Huge Win

Brown and wife Ryan Michelle Bathe's reaction to This Is Us winning outstanding performance by an ensemble in a drama series is serious #couplegoals. The two stood up to give each other high fives and a kiss to commemorate the moment. 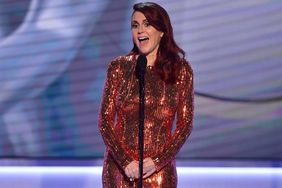 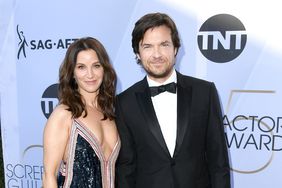 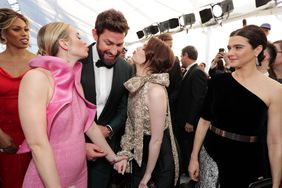 From Red Carpet Kisses to Giggle Fits, the Best Candid Pics from the 2019 SAG Awards 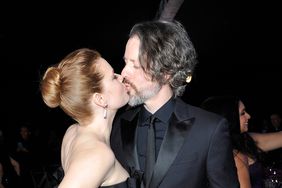