But an Academy Award spokeswoman says, "We can't include everybody" in the tribute montage

Farrah Fawcett’s longtime partner, Ryan O’Neal, has joined other Hollywood figures including Jane Fonda and Roger Ebert in expressing dismay that Fawcett was left out of the “In Memoriam” segment of Sunday’s Academy Awards.

“There is no comment other than we were disappointed that she was not included,” a rep for O’Neal tells PEOPLE.

Fonda and Ebert both Tweeted about the snub during the broadcast. “No Farrah Fawcett in the memorial tribute? Major fail,” Ebert wrote. “And where was Farrah Fawcett? She should have been included #oscars #FAIL,” wrote Fonda.
PHOTOS: Farrah: The Golden Girl Era
The “In Memoriam” portion of the broadcast features a montage of film-industry figures who have passed away in the previous year. Academy of Motion Pictures Arts and Sciences spokeswoman Leslie Unger says the segment can only honor so many people.

“Every year it’s an unfortunate reality that we can’t include everybody,” she tells the Associated Press.

Even before the show, Academy executive director Bruce Davis spoke about the difficult process of creating the segment. “It is the single most troubling element of the Oscar show every year,” he told AP last week. “Because more people die each year than can possibly be included in that segment.”

Davis explained that he and a small committee narrow an initial list of more than 100 people down to about 30. “It gets close to agonizing by the end,” he said. “You are dropping people who the public knows. It’s just not comfortable.”

Fawcett, who died last June at age 62, was primarily a TV actress, though she did appear in a number of feature films. 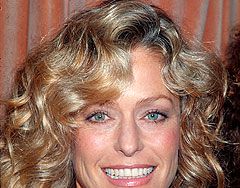 Melissa Rivers on Joan's Oscars 'In Memoriam' Snub: Honoring Her 'Would Have Been Nice'