From Amy Winehouse's jailhouse shout-out to Miley's men, see what the stars had to say!

"To my Blake, incarcerated!"

– Amy Winehouse, including her jailed husband in her record of the year acceptance speech made via satellite from London

"She'd like to thank Jigga Man for being the greatest in the world."

– Jay-Z, jokingly translating for the Barbados-born Rihanna, who thanked him for being a part of her single, "Umbrella," after she won best rap/sung collaboration

"I just got an award given to me by a Beatle. Have you had that happen yet, Kanye?"

– Vince Gill, after Ringo Starr awarded him best country album. Both Gill and Kanye West were in competition for album of the year.

"It would be in good taste to stop the music."

– Kanye West, sending a word to the orchestra, as he gave his best rap album acceptance speech to pay tribute to his late mother

"By the power invested in me by whoever booked me for this gig, I have the honor of revealing the winner of this year's My Grammy Moment competition."

– Jason Bateman, announcing winner Ann Marie Calhoun, who got to perform with the Foo Fighters

"My dad said he would take it off with a belt sander."

– Taylor Swift, on what would happen if she replaced her faux tattoo with a real heart-shaped one on her left foot to commemorate her self-titled disc going double platinum

"He knows it's platonic."

– Delilah DiCrescenzo, on her boyfriend being okay with her attending the Grammys with the Plain White T's singer Tom Higgenson, who wrote the song "Hey There Delilah" after striking up a flirtation with her years ago

"I think she's a sexy young lady. I have kids as old as her ... That did not stop me from noticing."

– The Time's Morris Day, after performing onstage with Rihanna

"There are only three men I love: Jesus, my brothers and my dad."

– Miley Cyrus, on her single status 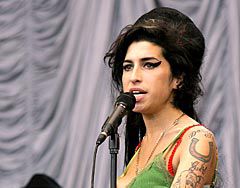