DIED: Adam Sandler’s beloved pooch Meatball, 4, passed away Jan. 26, reports PEOPLE in its latest issue. The bulldog, whose drinking and drooling problems were well chronicled on the actor’s Web page, also appeared in Sandler’s 2000 film “Little Nicky.” Sandler, 37, held a memorial service at his Malibu home for more than 100 people and served a cake that featured Meatball’s face. Guests received T-shirts with the dog’s image. As for the actor’s other bulldog, Matzoball is sad but fine, according to the magazine.

NAMED: Sandra Bullock, 39, and Robert Downey Jr., 38, will receive this year’s Hasty Pudding awards at Harvard University, it was announced Thursday by Hasty Pudding Theatricals, the nation’s oldest undergraduate drama troupe. The honors go to performers who have made a “lasting and impressive contribution to the world of entertainment” and who then get to lead a street parade of Harvard students in drag. Bullock leads her parade Feb. 12; Downey, a week later.

QUOTED: “I wouldn’t kick President Bush out of my bed, although I do think he needs some sassy highlights.” — “Queer Eye for the Straight Guy” mouthpiece Carson Kressley, 34, on CNBC’s “The Big Idea with Donny Deutsch,” as picked up by New York’s Daily News

HURT: Championship snowboarder Tara Dakides, 30, performing a stunt for CBS’s “Late Show with David Letterman” veered off a ramp on a Manhattan street and fell 25 feet to the ground Thursday, reports the Associated Press. Dakides was taken to a hospital and was listed in stable condition, said show producer Rob Burnett. Because of the accident, “Late Show” stopped taping and aired a repeat episode.

PLEADED: Rapper Master P (real name: Percy Miller), 33, pleaded guilty in a Louisiana federal court Thursday to failing to file a corporate income tax return seven years ago, reports the AP. The alleged tax crime carries a maximum sentence of five years probation, a fine of $200,000 or twice the financial gain or loss (whichever is greater) and the cost of prosecution. A sentencing date is to be set. 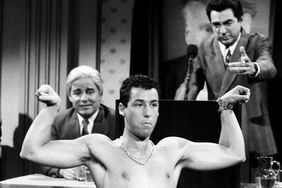