After years of nominations, Hargitay and Sutherland nab the night's big wins

“When I named my son August, I had no idea that the month would end like this!” said the thrilled Hargitay – who, with husband Peter Hermann, welcomed their first child on June 28.

Kiefer Sutherland won his first-ever Emmy – after nine nominations – for best actor in the drama 24. Clutching his statuette, Sutherland said the win meant he’d be having dinner with his father, actor Donald Sutherland, who was also in the Shrine Auditorium.

He called his six years on 24 – which also was named best dramatic series – “nothing short of exceptional.”

The New Adventures of Old Christine star Julia Louis-Dreyfus took her second Emmy, this time for leading actress in a comedy series. Her first was for her supporting role as Elaine on Seinfeld.

As the first costar from that seminal sitcom to escape the “Seinfeld curse” and have a success with another show, Louis-Dreyfus said, “I’m not somebody who really believes in curses.” Then, holding up her Emmy, she said, “But curse this, baby!”

The Office, starring Steve Carell and based on a British sitcom created by Ricky Gervais, was named best comedy series.

Melrose Place star Locklear said that the “warm, generous and loving” Spelling referred to her as his “lucky penny.” Dynasty diva Collins recalled meeting him when he was a struggling actor who was confident he would one day become a successful producer.

Spelling’s Charlie’s Angels – Kate Jackson, Farrah Fawcett and Jaclyn Smith – all teared up while remembering their starmaker, as his widow, Candy Spelling, wiped away her tears while sitting in the audience next to her son, Randy Spelling.

When the awards resumed, The Amazing Race continued its amazing run as best reality show, winning its fourth Emmy and beating such strong contenders as American Idol and Survivor.

HBO’s The Girl in the Café, a romantic character drama set against the G8 conference, was named best TV movie. Kelly Macdonald was named best supporting actress for her performance and Richard Curtis was cited for his direction. HBO’s Elizabeth I was named best miniseries – and its leading lady, Helen Mirren, best actress in a miniseries.

At Sunday’s 58th annual Emmy Awards, The Daily Show, for the fourth year in a row, took the prize for outstanding variety, music or comedy show.

Accepting his award, host Jon Stewart, who produces the also-nominated The Colbert Report, said, “I think this year you actually made a terrible mistake.” Report host Stephen Colbert, who was sitting behind Stewart in the audience, planted a big kiss on Stewart when his name was announced.

Monk star Tony Shalhoub won his third Emmy as lead in a comedy series. “There’s been a terrible mistake,” he quipped at the podium. “I never win anything.”

Pretending to turn serious, he added, “It’s gratifying to be chosen from such a distinguished group of losers – actors.” He was referring to the other nominees: Steve Carell, for The Office; Larry David, Curb Your Enthusiasm; Kevin James, The King of Queens; and Charlie Sheen, Two and a Half Men.

Other winners were supporting actor Jeremy Irons, for the HBO miniseries Elizabeth I, and lead dramatic actor in a TV movie or miniseries Andre Braugher, for Thief.

In the comedy categories, My Name Is Earl won for both writing and directing. Greg Garcia, picking up his trophy for penning the sitcom’s pilot, said in his acceptance speech that he wouldn’t thank God, “because You took my hair away, and that wasn’t cool.”

The Sopranos took the writing award for dramatic series.

judge Simon Cowell, who received a smattering of boos from the crowd, introduced a tribute to Dick Clark and his shows American Bandstand, The Golden Globes and New Year’s Rockin’ Eve, among others.

Sitting at a podium, the 76-year-old Clark, who suffered a stroke in December 2004, told the audience in slightly slurred speech that “the Emmy people asked me to walk out and say a few words. My wife joked, ‘Walk? He’s just begun to walk again.’ ”

Clark, who received the evening’s first standing ovation, emphasized, “I have accomplished my childhood dream, to be in show business.” A musical tribute by Barry Manilow followed.

Minutes later, Manilow picked up an Emmy as best musical performer for the PBS special based on his Las Vegas show. He said he was taking the trophy with him to the hospital as a good-luck charm on Monday, when he is scheduled for surgery to repair torn cartilage in both hips.

An effusive Piven took the Emmy in the comedy category for his supporting role as agent Ari Gold on HBO’s Entourage. Earlier on the red carpet, the ascot-wearing actor announced his date for the evening: “I’m the only straight man here who’s brought his mother two years in a row.”

Mullally, picking up her second comedic supporting actress Emmy for her role as Will & Grace’s boozy Karen Walker, said, “Here come the waterworks – I never cried on national television. I think I like it.” (She won her first Emmy in 2000, for the show’s first season.)

Alan Alda won best dramatic supporting actor for his role as Arnold Vinick, nabbing the record-setting 26th Emmy for The West Wing, which closed up shop in May. (Alda was not present at the ceremony.) The White House drama has now surpassed the 25 Emmys won by Hill Street Blues and L.A. Law.

The supporting actress in a drama winner was Blythe Danner, for Showtime’s Huff. She said she’ll miss the show, which has been cancelled.

The awards show opened with a satiric film in which host Conan O’Brien struggles to make his way to the Emmys after surviving a plane crash, landing on an island, and asking another castaway if he’d like to escape with him to the Emmys.

“It’s not as if we were invited,” replied the castaway – Jorge Garcia, who plays Hurley on last year’s dramatic series winner, Lost (which was virtually shut out of the major categories this year).

But those who were facing the heat of competition Sunday night complained of the very real heat outside Los Angeles’s Shrine Auditorium, where the thermometer hit 100 degrees and the TV lights only added to the discomfort.

“It’s hot as H,” said nominee Jon Voight, up for his leading role in the TV movie Pope John Paul II. Asked by NBC’s Maria Menounos if he were proud of daughter Angelina Jolie’s many accomplishments, Voight, who is estranged from Jolie, said, “You bet, you bet. I send my love her way, to the kids, to she and Brad.”

The Office comedy series nominee Steve Carrell said he was sweating, but that it really didn’t matter. “I’ve come here to lose,” he said as he embraced his fellow arrival, American Idol judge Randy Jackson – who, despite the weather, sported a three-piece tux. 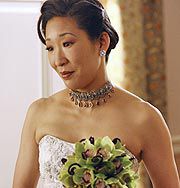 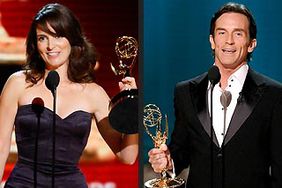 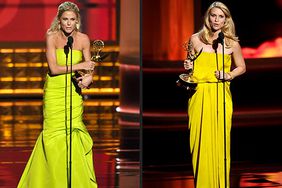 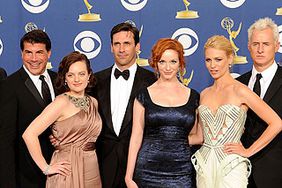 From SJP to JLD: 13 of Our Favorite Emmys Acceptance Speeches 'Ever'