"He totally wants to sleep with me," the Black Swan star says of her fiancé and costar

There were great expectations about Natalie Portman‘s Golden Globes night: Would she win a best actress award – and what would she wear?

On both fronts, the night delivered.

The mom-to-be won best performance in a motion picture drama for her turn as the disturbed ballet dancer Nina Sayers in Black Swan, and on stage she thanked her French dancer fiancé Benjamin Millepied, with whom she’s expecting her first child.

“He’s the best actor,” she said on stage about Millepied, who choreographed the film and also costarred in it as a dancer who said he was not sexually attracted to her character. “It’s not true,” she said onstage. “He totally wants to sleep with me.”

Before the ceremony, Portman, 29, showcased her baby bump and glowed in a Viktor & Rolf gown and Tiffany jewelry on the red carpet.

“I’m really bad at taking compliments [and] congratulations, that kind of thing,” the actress told Ryan Seacrest before the show. “So, I’m going to squeeze it into one thing. Everyone can be like one big congratulation.”

She also told Seacrest she’s just starting to pick out baby names. “I’ve definitely been thinking about it,” she said. “[I’m] open to suggestions.”

As for motherhood, Portman is equally overjoyed.

“I am indescribably happy and feel very grateful to have this experience,” Portman, who recently won a Critics’ Choice Movie Award, told Entertainment Weekly recently about her pregnancy. 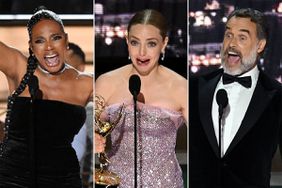 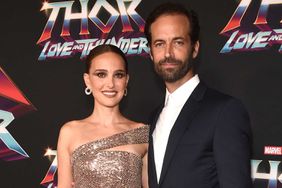