In case you hadn't heard, the "Hello" singer had quite the night

There were plenty of memorable moments at this year’s Grammy Awards that got everyone (including a very enthusiastic Chrissy Teigen) talking.

And while we have yet to recover from Beyoncé’s mind-blowing performance or Rihanna’s suave moves (i.e. taking swigs from her bedazzled flask and FaceTiming in the middle of the ceremony), we’re still focused on Adele, who not only made history with her Grammy wins, but also proved she’s not immune to the magic of Queen Bey.

Adele had a really, really epic night at Sunday’s Grammy Awards— here’s why.

She showed up on the Grammys red carpet looking flawless.

Givenchy and Adele go together like Gigi and Kendall.

And if you look closely, she paid homage to Beyoncé and Lemonade.

Yep, that looks like a lemon-shaped accessory on her gown to us, too.

She took time to greet fans and sign autographs.

She opened up the show with “Hello.”

And was so relieved when it went flawlessly, even mouthing “phew” at the end of her performance. Plus she shouted out her baby, which was supercute.

She rocked cross earrings in honor of George Michael.

It was a subtle and sweet detail for her tribute performance to the late musician.

She started her performance over again following technical difficulties.

Just seconds into her emotional take on Michael’s 1996 hit “Fastlove,” Adele stopped abruptly and asked to start over. “I know it’s live TV; I’m sorry I can’t do it again, like last year,” the singer-songwriter said onstage, referencing her rough 2016 Grammys performance. “I’m sorry for swearing. I’m sorry for starting again. Can we please start it again? I’m sorry — I can’t mess this up for him. I’m sorry, I’m sorry for swearing! I’m really sorry. Sorry.”

She posed for pics with Lady Gaga backstage.

Lady Gaga, like the rest of the world, is a big Adele fan, and just had to snap a photo with the Grammy-winning artist following the “Hello” crooner’s performance. “This one,” she captioned her shot alongside princess and heart emojis. “Killin it tonight like girls do.”

Sshe took home the Grammy for record of the year (among others).

And if we didn’t already love her, Adele mouthed “I love you” to Beyoncé as she walked up to the stage to accept her award. “And my idol is Queen Bey and I adore you,” Adele said during her record of the year speech. “You move my soul every single day and you have done for nearly 17 years. I adore you and I want you to be my mummy, alright?”

She confirmed her marriage to longtime love Simon Konecki.

After spending much of her acceptance speech gushing over fellow nominee Beyoncé, Adele said, “Grammys, I appreciate it, the Academy, I love you, my manager, my husband and my son – you’re the only reason I do it.” Adele and Simon Konecki share a child together, 4-year-old son Angelo.

She won album of the year and dedicated her Grammy to Beyoncé.

In what was quite possibly the most emotional part of the evening, Adele — who was awarded the show’s top honor — dedicated her Grammy to Beyoncé.

“I’m very humbled and I’m very grateful and gracious, but my artist of my life is Beyoncé and this album to me, the Lemonade album, was just so monumental,” she said, acknowledging the expectant singer, who was mere steps away from her.

“It was so monumental and so well thought-out and so beautiful and soul-baring,” Adele continued. “We all got to see another side to you that you don’t always let us see and we appreciate that. All us artists here adore you. You are our light!”

Then she accidentally broke her album of the year Grammy.

Just after delivering her mic-dropping speech, Adele broke her Grammy in half while onstage, reportedly to give to the “Hold Up” singer (or, you know, by accident).

And she made Grammys history.

It’s official: Adele is now the first person to win record of the year, song of the year and album of the year in one night — twice. 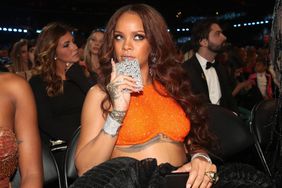 The 13 Grammy Moments We 'Cannot' Stop Talking About 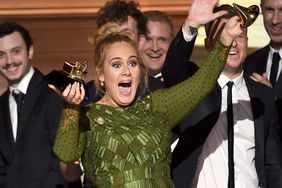 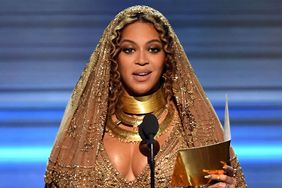 The Most Memorable Quotes from the 2017 Grammys 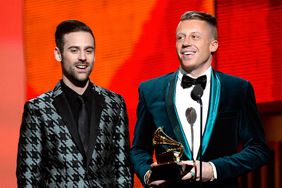