Gervais teased everyone from Johnny Depp to Kim Kardashian on Sunday's telecast – but was it in bad taste?

It took fewer than two minutes for Golden Globes host Ricky Gervais to zap his first target of the night.

The dubious distinction went to Kim Kardashian, about whom the silver-tongued host said, “The Golden Globes are to the Oscars what Kim Kardashian is to Kate Middleton a bit louder, a bit trashier, a bit drunker and more easily bought, allegedly.”

And so Sunday’s 69th Golden Globe Awards were off and running.

PHOTOS: See the Stars As They Hit the Red Carpet

Word of his return to the Beverly Hilton Hotel was met with mixed reviews (and perhaps a little fun-loving fear) from the people his sometimes-crass, sometimes-cruel humor offended and delighted last year.

Here’s a selection of his most laugh-out-loud zingers of the night:

• In his opening monologue, Gervais characteristically took few prisoners, sparing neither the Globes themselves or even the network broadcasting them. He said the awards from the Hollywood Foreign Press Association were “just like the Oscars, but without all the esteem.”

• The first presenter of the night was Johnny Depp, whom Gervais razzed unmercifully last year about his movie with Angelina Jolie, The Tourist. Gervais asked Depp, “Have you seen The Tourist yet?” As the crowd laughed, Depp admitted he hadn’t.

• Another movie the tongue-and-cheek host was critical of: the Jodie Foster-directed The Beaver. Foster stars in the film with Mel Gibson: “I mustn’t mention Mel Gibson this year. Not his private life, his politics, his recent films or especially not Jodie Foster’s Beaver.”

• Although the pop star put rumors to rest in November, Gervais also voiced his opinion on Justin Bieber‘s paternity-test drama: “The only way he could have impregnated a girl was if he borrowed one of Martha Stewart’s old turkey basters.”

• Playing nice, Gervais praised the stars of Bridesmaids for getting down and dirty in the female-ensemble comedy: “The cast spent a weekend with Dame Helen Mirren.”

Now that the 2012 red-carpet season has officially begun, tell us:

PHOTOS: Best Dressed at the Globes 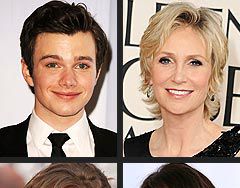 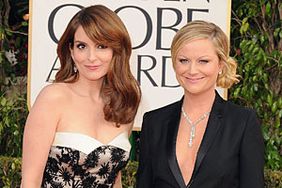