"She looks good, huh?" he says, as the couple make their way through the Oscar parties

It must be serious!

For the first time ever, George Clooney brought a girlfriend to the Oscars. As the two moved slowly down the red carpet Sunday night, the 46-year-old actor kept his hand on the small of Sarah Larson’s back, rubbing her reassuringly as he talked to the press.

And the Michael Clayton star – who was up for Best Actor – was full of praise for his 28-year-old date, who looked radiant in a clingy floral Valentino gown.

“She looks good, huh?” he told PEOPLE on the red carpet. He jokingly added, “I tried it on first and it looked terrible on me.”

When she noted that the dress was “really heavy,” he gallantly volunteered, “I will carry her.”

The two have been dating for less than a year, but this is not Larson’s first red carpet experience. The onetime Fear Factor winner had her “coming out” as Clooney’s girlfriend at the Venice and Deauville film festivals last fall.

The love-fest continued throughout the night, as Clooney proudly introduced her to his friends – including double-nominee Cate Blanchett – saying simply, “This is Sarah.”

Later, when Renée Zellweger passed behind the couple on the way to her seat, she tapped Larson on the shoulder. Gesturing to Clooney, the actress playfully gave the okay sign.

After the show, the couple – who met while Larson was waitressing at a Las Vegas club and were both injured in Clooney’s September motorcycle crash – partied up a storm at the Governor’s Ball.

Clooney – who lost the Oscar to Daniel Day-Lewis – seemed especially ready to unwind, taking off his tie and undoing the top few buttons of his shirt. Even when he was talking shop with a few business associates, he kept one hand on Larson. 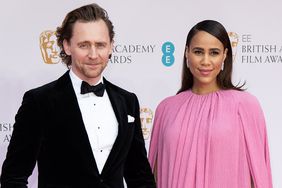 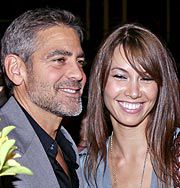 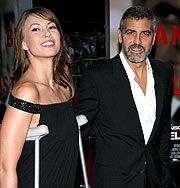 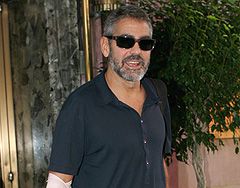