The Transamerica and Crash stars score at the Independent Spirit Awards

Felicity Huffman walked away a winner at the Independent Spirit Awards, the art-house world’s equivalent to the Oscars, which took place Saturday in Santa Monica.

“This is a validation because it means people saw it,” Huffman said of winning best female lead for her role as a preoperative transsexual in Transamerica. Capote‘s Hoffman was named male lead. Both are competing for Oscars.

Meanwhile, Oscar nominees Crash‘s Matt Dillon, who plays a racist cop in the ensemble movie, and Junebug star Amy Adams won supporting male and female honors. “I know everything that (director) Paul Haggis went through to get this movie made, and how much of an independent movie it was, so to be part of that and recognized for it is just wonderful,” Dillon said.

The family drama The Squid and the Whale, which was nominated in six categories, didn’t win any Indy Spirit Awards.

Now in its 21st year, the Independent Spirit Awards are organized by Film Independent, a group that nurtures indie filmmakers.

Clooney Up for Indie Oscar 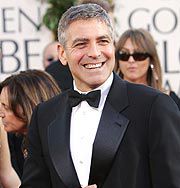 Clooney on His 'Fun' Oscar Morning