The producer-turned-rapper was joined by Lil' Kim, Mase, Pharrell, and many more stars

Diddy’s surprise ’90s revival performance at the 2015 BET Awards stayed right on track even after the rapper took a serious onstage tumble – into a hole!

Diddy (or as he was better known back in 1997, Puff Daddy) slipped into a hole that was used for another performer’s big entrance, but quickly recovered with fan help.

Despite the mishap, Diddy got the entire audience up on their feet during the surprise performance to mark record label Bad Boy’s 20th anniversary.

The producer-turned-rapper reunited with his frequent collaborator Mase as well as Bad Boy favorites like Faith Evans and Lil’ Kim, who sent the crowd into screams when she popped up onstage.

The medley of hits included favorites like “It’s All About the Benjamins,” “Mo’ Money, Mo’ Problems,” and “Love Like This Before.”

Diddy was also joined on stage by Pharrell for the world premiere and television debut of their new song “Finna Get Loose” (available now on iTunes).

However, while Diddy made a nod to his late friend, the performance was all about fun, and even got stars like Rihanna dancing and mouthing along to the words of the hit songs. 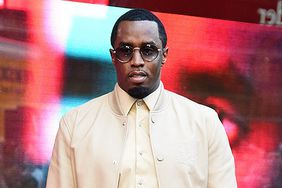