It was about a year before his astonishing visage would become an inescapable fixture of pop culture. The rock star-to-be had arrived at a nobby New York restaurant for a luncheon interview, caparisoned in full regalia and thorough anonymity. But dollops of mascara, shoulder-length hair, thigh-high boots and a raunchy jump suit did not disguise the gender of Vincent Furnier any better than does his stage name—Alice Cooper. Shaken to the depths of their martini glasses by the vision, a group of businessmen at an adjoining table launched into a crescendo of wisecracks. They were not ignored. As Alice and his interviewer rose to leave at the end of their meal, the glittery gamin strode over to the businessmen’s table, put his brawny arm lovingly around the shoulder of the most offensive of the executives and cooed in a tone audible to the far corners of the restaurant, “So very nice to see you again!”

On a recent overcast afternoon Alice Cooper was at the Malibu beachfront home of his manager entertaining some guests with memories of things past and boasts of things to come. It is difficult to relate the tanned, dimple-cheeked hospitable young man, whose graciousness is lubricated by hearty swigs from an ever present can of beer, with the kohl-eyed freak known to hack open a “blood”-filled baby doll on stage. Alice Cooper’s critics have tried, only to conclude that the lurid professional image must be a put-on. There remains a gnawing question: What kind of guy would put that on?

Vincent Damon (after Damon Runyon) Furnier—AKA Alice Cooper—is, among other things, the son of a lay-preacher in the fundamentalist Church of Jesus Christ, a borderline alcoholic, one of the most successful musicians of all time (but who has never really mastered even a squeaking harmonica), a golf addict, a heterosexual with a penchant for sexually ambiguous clothing, a Nixon Republican, and at 26 a self-made millionaire. And with the release this May of his first film, Hard-Hearted Alice, he is out to make it big as a movie star.

Glancing out at the gentle California surf, Alice reminisced about the Odyssey of the five friends who make up the Alice Cooper band. They met ten years ago when they were members of the same high school track team in Phoenix, Arizona, the town to which his family had moved when Vincent was 14 years old.

“We were all milers,” says Alice. “When the Beatles first came out, we started making up our own track words for their songs.”

Getting up, Alice lounged toward the kitchen and opened the refrigerator to reveal an interior stacked as tightly as a submarine’s with cold cuts and neatly wrapped loaves. The syrupy strains of one of Alice’s cherished Burt Bacharach records was punctuated by the popping top of yet another in the endless chain of Budweiser beers with which he paces his day. His thoughts were still in Phoenix as he went on to tell how “just a few weeks ago” his mother answered the doorbell to be confronted by workmen asking where she’d like the swimming pool installed. (Alice keeps time as dizzily as the White Rabbit, another aspect of the put-on he cultivates toward the world. The pool actually was installed two Christmases ago.) “The deal was that if I could grow my hair long, I would buy them a swimming pool when I grew up. My mother was still sending me five bucks a week until not too long ago, the way she used to when we were really starving. Maybe the swimming pool will convince her I really don’t need it anymore.” (That’s a fact, Mrs. Furnier. Alice Cooper’s national tour last spring grossed over four-and-a-half million dollars. His last five albums have each had sales of over $5 million.)

The Phoenix high school crowd loved it when the Beatle-struck milers—garbed appropriately in track shoes and warm-up suits, embellished with wigs and sunglasses—hit the stage. “We were so good, we won the trophy at a lettermen’s talent show at school,” says Alice. During the next few years the group changed its name from the Earwigs to the Spiders (“We performed in front of a giant green web”), and by the time all five of them had put in a year studying fine arts at a local community college, the band could claim to be number one in town. They headed for the bigtime.

With exactly $40 among them, Alice and company coaxed a ’58 Dodge station wagon to Los Angeles. “We got here in the midst of all the good groups, like The Doors and Love,” remembers Alice. “The competition was incredible. No one would even listen to us.” The group, now called “Nazz,” knew they had to have a gimmick, something to make them stand out against the crowd. First they changed the name of the group to “Alice Cooper.” “It sounded so American,” says Alice—whose friends never call him Vincent anymore. “We thought everybody would expect some blonde folk singer with her guitar.”

By then the group’s repertoire was composed entirely of their own hard-rock material. “We were wearing anything we could find,” recalls Alice—whose later, luminous anointments would make him the very first of the glitter rock stars whose sexual ambivalence on stage was as important to their act as the pounding music. “I would go on in a pink satin clown costume, with blue eye makeup and a bottle of wine. I’d drink so much I’d pass out on stage. That was when I was really crazy,” confesses Alice, who now says he is down to a comparatively abstemious case of beer and half a fifth of Seagram’s V.O. per day.

Nonetheless, Cher Cottley who ran an L.A. nightspot called Cheetah hired the loonies. They repaid the woman by moving in with her and her four children. “We were pitiful,” says Alice. “Oh, we were so disgusting.” One of Cooper’s musicians, a lady killer, would bring home girls just so the others might rifle their purses for lunch money. “When you look back on it, it was just as bad as it sounds,” observes Alice. And so was their act. The “in” thing to do in L.A. was to go to Cheetah and walk out on Alice and the boys. “They exhibited the strongest negative force I’d ever seen,” interjects manager Shep Gordon. Inversely impressed, he signed them. Another of their early fans was famed Frank Zappa of the Mothers of Invention. Zappa arranged to record Alice Cooper’s first two albums in 1969-70, Pretties for You and Easy Action, both bombs. “Our reputation was because of the stage show,” insists Alice. “We refined the madness. We would open pillows and have compressed air blow the feathers everywhere. We would totally involve the audience.”

The audience, in fact, was getting so involved that repercussions occurred. “Somebody threw a chicken on stage one night,” says Alice, with faint rue. “I thought it would fly away! Chickens are birds after all. I threw it toward the audience. They were so crazy, they grabbed it and tore it apart. The next thing I heard was that Alice Cooper had cut a chicken’s throat and drunk the blood. From then on every time we came into a town we had to check with the humane society.”

It was in 1970, at a Toronto rock ‘n’ roll festival, that Alice Cooper began to incorporate such niceties as a guillotine, a gallows, an electric chair and a live boa constrictor into the act. “It’s like The Exorcist,” theorizes Alice. “People like to be scared”—or at least the teeny-bopper crowd that Alice attracts does. “It’s the same audience as the Osmond Brothers. The older kids don’t want to have any fun.”

Lucrative though their last major tour in 1973 was, it’s hard to believe Alice was having much fun himself. By the time the 52-city marathon was completed, he was on the brink of collapse. Afflicted with innumerable phobias, he would wake up during the night not knowing where he was, or would grab the phone to call room service when he was in fact in his own apartment.

Part of Alice’s confusion is understandable. He has no fewer than four homes—a mansion in Greenwich, Conn. (wherein abide the group’s two pet dogs and five boa constrictors), a home in the Hollywood hills, an apartment in New York (looked after by his itch of seven years, Cindy Lang, a model chummy with the Warhol set) and a house in Phoenix which Alice rents out. “It’s next door to Barry Goldwater,” enthuses Alice. “I can’t wait to go over and borrow a cup of sugar.”

With their musical stage show honed to machinelike precision, the boas—and their keepers—well cared for, the guillotine lubricated for the South American tour now underway, it was inevitable that Alice and the boys would direct their energies into fresh pursuits. Alice’s guest appearances on the Hollywood Squares and The Snoop Sisters only whetted his desire to expand into film. “We had to get a movie out,” Alice feels. “Our scene is actually visual.” Most music critics would agree.

The film Hard-Hearted Alice, true to a genre, consists of little more than a montage of footage shot at their concerts wound around a flimsy plot: a character called Herr Direktor is trying to do a movie of the group which, for its part, only wants to get on with the tour. Alice owns the property, will control all advertising and promotion and has no doubt about the film’s inevitable success. “The only place we were banned on tour was in Binghamton, N.Y.,” says Alice, grinning beatifically. “We plan to premiere the film there.

“We feel we’ve been successful in promoting Alice,” continues Alice himself, to not a peep of disagreement. “To me Alice is a product. If I ever got to be Alice, I would be in real trouble. Alice on stage is a whole different thing. Offstage I’m Ozzie Nelson. It’s like Jekyll and Hyde to me.” And with that, the offstage Alice sucked down the last of a beer, grabbed a nine iron and skipped out on the Malibu beach to blast his way out of some imaginary sand traps. 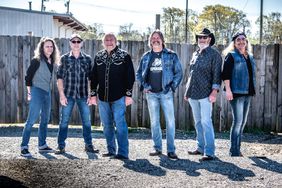 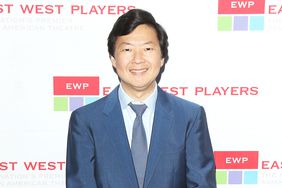 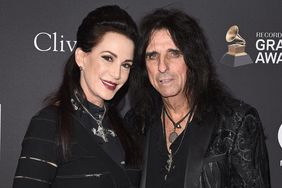 Alice Cooper Shuts Down Rumors That He Has a Death Pact with His Wife: 'I'm Booked Through 2028' 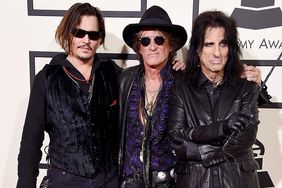 The Preacher and The Prostitute 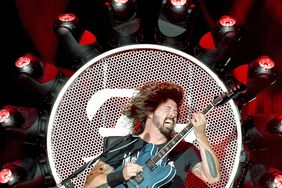 Trap Them, Dave Grohl and a Brief History of Musicians Being Injured Falling Off Stage 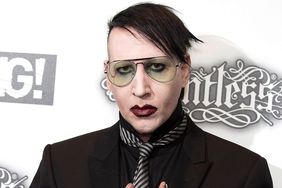