Just weeks by his side, Angelina Jolie says 'I do' to Billy Bob Thornton

Like the 6,000 other quickie ceremonies that take place every year at the Little Church of the West Wedding Chapel in Las Vegas, the nuptials on the afternoon of May 5 were short and sweet. As an organist played “Here Comes the Bride,” she walked down the aisle carrying red and white roses, and 20 minutes later the couple posed for the portrait included in the $189 Beginning Package. “They came in,” says chapel owner Greg Smith, “like anyone else.”

Only the newly weds weren’t just anyone else. Clad in a blue sleeveless sweater and jeans, Oscar winner Angelina Jolie, 24, vowed to love and honor—but not obey—actor-director Billy Bob Thornton, 44, who wore jeans and his trademark baseball cap. “He identified himself as Bill Thornton when he made the reservation,” says Smith. “I didn’t know it was him until they got here.”

In fact, the wedding came as a surprise to just about everyone, since the pair went public only a month ago. Jolie’s father, Jon Voight, didn’t attend. Neither did her brother and frequent red-carpet escort, Jamie Haven, whose overtly affectionate relationship with Jolie had raised eyebrows. (Thornton’s pal, cinematographer Harve Cook, served as best man and witness.) And no one could have been more stunned than actress Laura Dern, with whom Thornton had recently shared a household. “I’m now happily involved with someone who’s my best friend,” he said of Dern during an interview with Men’s Journal last October. “We have a dog and a yard.”

Thornton and Jolie actually have experience as man and wife, having played an eccentric couple in the 1999 movie Pushing Tin. “They were extremely convincing as a couple in front of the camera,” says the film’s producer, Art Linson. “But I thought it was just real good acting and nothing more.”

At the time, however, both were otherwise attached. Thornton, who won a Best Adapted Screenplay Oscar for 1996’s Sling Blade, had been partnered with Dern since 1997, when his fourth wife, Pietra Dawn Cherniak, with whom he has two sons, filed for divorce. (Thornton also has a daughter from his first marriage.) Jolie was separated from British actor Jonny Lee Miller, whom she married in 1996, and was dating Timothy Hutton.

The pair became an item before the Oscars in March, when Jolie celebrated her Best Supporting Actress win (for Girl, Interrupted) with Thornton at L.A.’s Sunset Marquis hotel. In April they were spotted together at a Los Angeles bowling alley with Matt Damon, Pénelope Cruz and other costars from the movie he directed, All the Pretty Horses. Though Thornton never visited Jolie on the Mexico set of the just-completed Dancing in the Dark, they kept up the courtship by phone. Soon afterward, their coupledom was announced to the world with a “Billy Bob” tattoo on Jolie’s arm. “I’m madly in love with this man,” she told Talk magazine, “and will be till the day I die.” So eager was she to wed him that on April 24 she had her lawyer petition the court to speed up finalizing her divorce from Miller. For Jolie, following her heart to the altar—however quickly—no doubt made perfect sense. “I view marriage,” she said last year, “as an amazing, wonderful thing.” 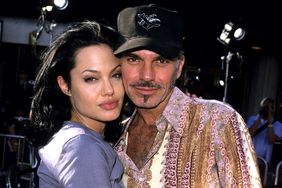 Billy Bob and Angelina Are Wed 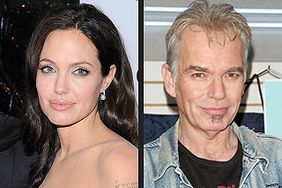